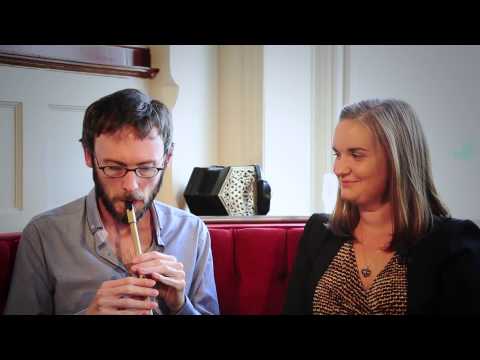 Here we are for a new interview about the Future of Irish Music. Our guests today are Yvonne Bolton and Alan Jordan.

They recorded in 2013 “Silver Threads“, an album that has been defined “a slice of unadulterated beauty” (Tim Carroll, Folkwords) and “musically fascinating” (John O’Regan, Irish Music Magazine). Yvonne Bolton from Co. Laois is an accomplished fiddle and concertina player, while Alan Jordan (guitar, vocals, low whistle) is from Co. Mayo and now lives in Limerick.

As usual, 7 questions (not one less, not one more) to know them better and to introduce their music to the Italian audience:

1.    Dear Yvonne & Alan, your debut album “Silver Threads”, seems to be really appreciated in Ireland and abroad; some of the tunes are original material, while others come from the traditional archive. Can you tell us something about your songs and how you chose the ones you selected? 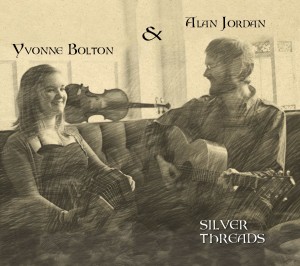 Thank you. Yes, the album has been well received and of course we are happy about that. It’s nice to read good reviews but also to bear in mind that each review is just an opinion. I would be lying to say that I didn’t care what people wrote about our music! We had originally considered doing an album of totally original material and then Yvonne suggested that we include traditional tunes too, so we went with that. The album consists of about two thirds music written by me and Yvonne. Mostly, we composed the tunes ourselves and then worked on arrangements together. We had plenty of music written, so there was no shortage of music to choose from. Some of my tunes like ‘The Dreamer’, I had written years ago and some are more recent.  We also included a song called ‘New Road’, which I wrote in the late 1990s. Some of Yvonne’s tunes like ‘Massacre de las Moscas’ are influenced by music outside of the Irish tradition, while others such as her reel ‘Christmas Day’ is uniquely hers but with a modern Irish feel to it. One person described our album as slightly left of traditional centre, and I think this is accurate. We chose music based on melodies we liked and music that was personally meaningful to us, rather than aiming to be traditional or modern. It was important to us that we could stand by what we were doing and be satisfied with our choices. We worked as a team in deciding what we were both happy to include on the album.

2.    Yvonne is from Killeshin, Co. Laois, Alan is from Curraghmore, Co. Mayo. How did you meet and decide to start to play music together?

We both studied music at the University of Limerick, which is where we met. We started playing music together and seemed to click as a working unit but also as two people, which I think is important. Music is a very personal thing, so it seems useful that people can relate to each other reasonably well if they are to play good music together. We played quite a lot in the Limerick session scene and eventually it seemed like a natural step to take to record the album. 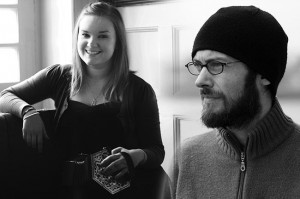 3.    It seems that Limerick is your meeting point and the foundation of this album; how much has this city influenced you and what do you think of the music scene in Limerick in this period of time?

Many great musicians have been in Limerick over the last 9 years that I have lived here, and Yvonne lived here from about 2005 till 2011. There are many wonderful musicians who live locally. In fact, when I am asked about my favourite musicians, I usually think of some of the local musicians who may not be well known, but who, in my opinion are as good as any I know of. I suppose that when you get to know people personally too, their music somehow means more to you. In any case, the scene in Limerick is thriving, with great musicians from the area and also a steady influx of great musicians who come to study in the University. So it’s really buzzing with trad around here!

And now are usual 4 questions to help our readers to know better the culture of the Emerald Island.

4.    What kind of music do Yvonne and Alan like to hear? What is on your CD reader or MP3 player right now (apart from “Silver Threads”)?

Alan: I only listen to Silver Threads!! I actually like a wide range of music and I tend to have particular favourites at different times. I like singer-songwriters like Paul Simon and Leonard Cohen. I like rock bands like Primal Scream. I used to listen to Primal Scream years ago and have recently been listening to them again. I love blues “one man and his guitar” music too. Actually this is probably one of my personal favourites. I think there is something very honest about the blues, and I think there is something of this honesty in traditional music too. I like all sorts of traditional music from the ‘old school’ music to the more modern stuff. I particularly like fiddle and flute music and I like the humour in Irish songs too. I came across one recently written and performed by Mickey McConnell called “The Ballad of Lidl and Aldi” which I absolutely love.

A CD I listen to a lot is ‘Upslide’ by Boston-based musician (and my cousin) John McGann, who sadly passed away recently. There are some lovely original compositions on that album.

5.     We love to speak and write about Irish culture, generally speaking. Any suggestions about books or writers from the Emerald Island to help a foreigner to understand you, Irish people, better?

Alan:  Not sure how to answer this question to be honest! Traditionally, Ireland has been a country of great writers. You would probably get some unique perspectives from people like Brendan Behan, James Joyce, George Bernard Shaw, Sean O Casey or Flann O Brien to name just a few. Ireland has been the birthplace of  many of the finest poets; people like W.B. Yeats, Patrick Kavanagh and Seamus Heaney, all of which give wonderful personal insight into what it means to be Irish. I think humour plays an important role in the Irish way of life and lots of the great writers have plenty of humour. Having a joke and a laugh is usually a good way to connect with an Irish person.

6.    Italy – Ireland: it seems there is a special bond between these 2 countries (at least from our point of view), probably beginning with our forefathers who immigrated in America. Thinking of Italy, what does come to your mind? What do you know, like (or not) of this country?

Alan:  I spent some time in Italy about 12 years ago on a few separate occasions. My visits there were all to do with music, and I must say we were very well looked after. My memories of those visits are of beautiful sunshine and friendly people who like to enjoy themselves. In my mind I associate Italy with people enjoying good food and drink, with an attitude of enjoying life and welcoming others to join them. I stayed mostly in a town called Vercelli, playing some gigs in Milan and Torino, and we also did a gig in Tuscany. We stayed in a beautiful house in the countryside – nice memories! I remember having a 16 course meal in an old vineyard. It’s probably the only time in my life that will happen!!

Yvonne: When I think of Italy I remember all the great visits I’ve had to your country. I think about the beautiful landscape, the sun, nice shoes, big jackets, designer sunglasses, the moped, pizza, pasta and last but not least my great friend Martino Vacca, an Italian All – Ireland uillean pipe champion. 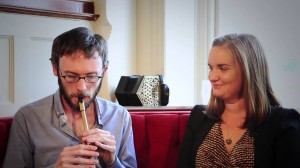 7.  Any other projects for your future? What would you like to be when you grow up?

Alan:  Plenty of projects in the future I’m sure! Yvonne and I would like to record another album. We have some new material together for that. Other than that, I have been working on some music for short film, which is very enjoyable and I continue to play music here on the Limerick session scene. I want to continue to compose music.  It is this creative side to it all that I really get satisfaction from. Hopefully we will play some gigs in Italy in the next year or 2. That would great fun!

Yvonne: We have already started working on our next album. I’m busy travelling around South East Asia at the minute but I plan on coming home in a few months with loads of new material inspired from this once in a lifetime trip. Hopefully we will have our next album recorded by the summer of 2014.

Please let us know when it will be ready; we are looking forward to listening to your music again!