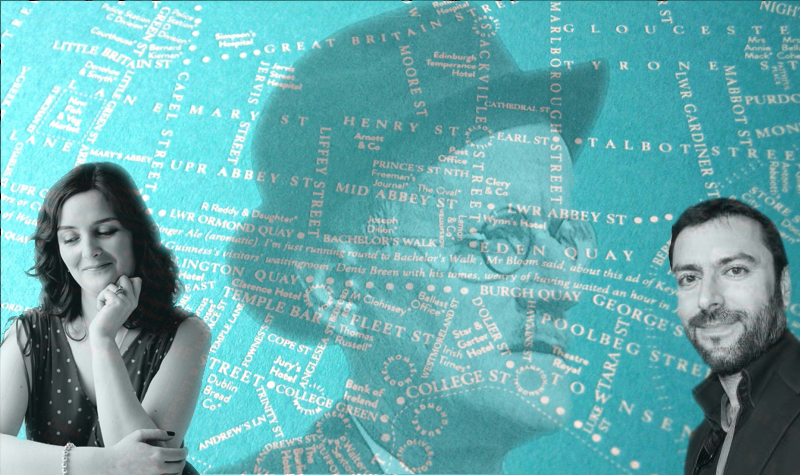 In 2013, next Bloomsday (almost: June 14th) will give to a… Dubliner audience, with Telmetale Bloomnibus, a sort of “XXI Century Ulysses”.

Italish:
You both, Nuala and Alan, got involved: so, it seems that, if you are an Irish writer, you must sooner or later, deal with Mr JJ.
But why? And how do you approach this issue?

We deal with him by reading him and learning from him too. You can’t be an Irish writer and ignore Joyce. He was an innovator and I love innovators.
I enjoy Joyce’s fiction and I’m interested in his life too and that of his wife, Nora Barnacle. Joyce was brave and mad and infuriating but he was definitely a genius.

You can’t be a modern writer and willfully ignore Joyce. I don’t think we deal with him really, in the sense that there’s no finality to it. How often do writers walking around Dublin think, that place is in Ulysses or that’s in Dubliners or trying to remember the bits they read of Finnegans Wake? We’ve absorbed Joyce and implicated him almost in what being a Dublin writer means.

It was by invitation from the Irish Writers’ Centre.

Same here, the IWC got in touch and asked would I like to be involved.

Italish:
Can you tell us something about how did you approach the assigned episode, and how did you deal with the Telmetale Bloomnibus rules (stories cannot mention Ulysses, The Odyssey or Joyce – though inspiration from the texts is allowed)?

We were allowed choose the episode we wanted to take inspiration from. I have always enjoyed the bawdy boldness of Molly Bloom (I write a lot about the body) and so I took the Penelope episode as my jumping off point. My Molly is called Penny and, like Molly, she is monologuing about her unfaithful husband. She is also a snob and wants to move away from the Council estate she lives on. She has a broad Dublin accent and she loves to criticise everyone she sees/meets (a very Dublin trait). She was fun to write.

I had this poem from the book I’ve just finished that I thought would suit the Hades chapter, so I asked Clodagh in the Writers’ Centre to put me down for that. I thought I was being clever using my readymade piece until I remembered the poem had absolutely nothing to do with Dublin. So I took the Circe episode instead and its worked out much better to be honest. I’ve made Olhausen’s my jumping off point. That of course being one of the great Dublin debates – who had the best sausages. I also like the ice cream vendor; my great grandfather was an ice cream vendor when he first came to Dublin back in the days of the Empire. There are whores in there as well.

Italish:
Joyce made out from Dublin a literary world capital: I can’t imagine another city (what do you think about that?) more bookishly overexposed. Dublin is fourth UNESCO City of Literature and, yes: you, and many others, are still writing about Dear Dirty Dublin… So: what’s so special? Is it really easier to set a story in Dublin? And what does it make Dublin so “book friendly”?
The people?
The urban landscape?
Is Dublin, a character by itself?

Well, for me, it’s my hometown and I know it well and love it, though I don’t live there anymore. (I will go back, though!) So it is easy and enjoyable for me to set fiction in Dublin, such as my novel YOU (New Island, 2010); my forthcoming novel The Closet Of Savage Mementos (New Island, 2014) is also partially set there. I love the shape of Dublin: the river, the bridges, the opening out to the sea; our hills that pass for mountains. I love how small it is and I love its landmarks: Liberty Hall, the Ha’penny Bridge etc. I went to school on Marlborough Street and college at TCD so the city centre is somewhere I love to be.
Dublin is a place I understand, and feel for, so I like to write about it. It definitely has personality: it is friendly, verbose and a little chaotic, but has a tough, unwieldy, maddening side too.

Joyce created an image of Dublin, a record of Dublin, that still filters through in people’s minds when they think of what Dublin should be in a literary sense. I mean he took a sort of dilapidated island city in Northern Europe and imagined it as epic. So I think part of the task in writing from Dublin now is to somehow find ways to avoid this epic Dublin. And I think that’s a good thing: Joyce’s Dublin is so vivid and, even now, modern enough that we’re forced to look beyond just representations of the city and come up with new ways of describing a smallish place that we’re familiar with and, at the same time, we come up with new ways of looking at what the city means and what it encompasses.
Lots of the younger writers who are writing about Dublin now are writing from the suburbs that ring the city and have become as much a part of what we understand by Dublin as its old neighbourhoods. I think Dublin, somewhat – and a little incongruously – like an American city despite our Viking roots, keeps shifting its shape. Its so closely linked to its people that when they move, these sort of invisible boundaries move with them. We still consume Dublin in the centre, between the canals: in bars, shops, restaurants, theatres and venues but most of the people from Dublin are scattered out around the M50. But like Nuala said, for most people from here the city maintains a kind of importance even if they don’t live there. Sentiment maybe in a place that is rarely sentimental but it’s where we were born, where our families came from, maybe where we were educated, where we got drunk / sobered up, where we fell in love / fell out of love and so on. All the things Joyce recorded of its previous citizens.

Let me imagine a wealthy Joyce with no health or money worries. Maybe a Parisian who loves his city with a pure love. He adores the underbelly of Paris, and explores it, but he is also safe within his marriage. He is the ultimate flaneur. But maybe that would make a boring book…would the feats of language be possible?

I was thinking about this on the train today: part of the feat of Ulysses was to place this great novel in a rough muddy city in Ireland and I think it was Alberto Moravia who said he could only imagine Ulysses having been written by an author from a dump and dark northern city. But all cities worth their salt have substantial underbellies suited to the task so maybe for an alternative, not perfect, Ulysses, we could have a Russian immigrant Joyce tackle what cities have become, in the Übersprawl of Los angeles.

Massimiliano "Q-ROB" Roveri writes on and about Internet since 1997. A philosopher lent to the IT world blogs, shares (and teaches how to blog and share) between Ireland and Italy.
@MassiMaxRov
Previous Telmetale Bloomnibus: con Nuala Ní Chonchúir e Alan Jude Moore
Next Martin McDonagh’s: a Beckettian perspective – Mankind and animals: the impossibility of empathy