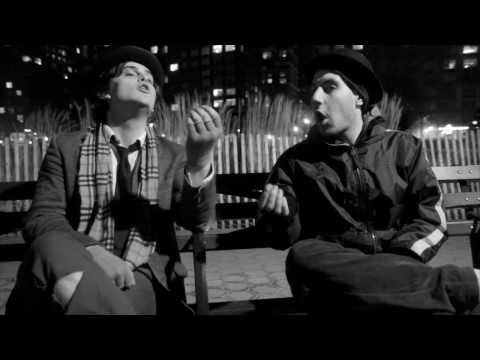 ItalishMagazine already dealt with the “web-friendliness” of Beckett. We are very happy to have on Italish Rudi “While Waiting For Godot” Azank!

Ciao Rudi, and thank you! Well: how did it start? Why Beckett, why Godot, and why Beckett & Godot “online”?

Two years ago I was studying film at New York University, and each day when I’d walk from my dormitory to my classes I would pass many homeless men and women.

I had been noticing an increase in the homeless each year since the recession began in 2009.

I was in Washington Square Park one weekend, rereading my favorite play En Attendant Godot, in a bilingual edition, and I began feeling a connection between Beckett’s two tramps and many of these men and women passing by me as I read; both homeless, both hungry, both waiting endlessly. In Beckett’s marvelous play the desperation of the lower class is presented so insightfully that I believe any audience member, no matter what their social status, can identify with the pathos of these two tramps’ ennui.

In making my film version of the story, a version in which all of the characters are now ‘New Yorkers’, I hoped my audience might feel something different the next time they pass a Didi or Gogo sleeping on the street. As New Yorkers, we pass them everyday, and trained ourselves not to notice them; in those moments we belong to the class represented by the character Pozzo, the aristocracy.

I spent half a year retranslating Beckett’s french text into our english screenplay, and while adapting the format, redesigned the story slightly to fit what I felt a cinematic experience of the play called for.

When the screenplay was complete I asked my good friend and classmate at NYU Ron Shelly to work on this adaptation with me. He is a comedian, and went to NYU for their cinematography program. Together we rehearsed the play and organized the production over three months, and then rehearsed another two months with Molly Densmore and J Moliere, who play Lucky and Pozzo. We raised the budget on the crowd-funding site Kickstarter, assembled a small crew, and set out on the streets on Manhattan to film this adaptation. For this production, Ron was both cinematographer and ‘Gogo’, and I was both director and ‘Didi’. Principle photography was in the fall of 2013.

The same question we asked Carl “Two Gallants” Finnegan, and that probably it is even more related to your project: Italish is a 100% “made on the web” magazine. Blogging, social media, crowd funding, Ulysses becoming a virtual reality game and Beckett a YouTube series (and a via – sms performance, with W8ing for Godot): what do you think about the relationship between the web / social media related kind of resources, the support they can provide, and cultural projects?

Our production simply couldn’t exist without the web. We raised our budget and found our producers through the web, and used the web to distribute the web series for free. It’s something of a Director’s Cut of the material, as I am also editing a feature film version of our story. These episodes offer the chance to edit the material in a slightly different manner, with an “episodic” mindset.

Furthermore, our script is a brand new translation from the original French text by Beckett, featuring many different passages than the British publication of the text many years later. More vulgar language, extended passages of meaningful banter, and different insights into the true meaning of the play.

The English publishers have always censored these parts. Since I was designing this production of Godot for the web, I thought “there’s no censorship on the web…why not offer a closer translation of the French version of the play for the english speaking audience?” The Beckett Estate was actually very accepting of my new translation of the text.

How are you using social media to support While Waiting for Godot?

It’s through our networking on social media like Facebook and Twitter that our series got noticed by the Rome Web Awards. We were invited to that festival, where we won Best Cinematography and I was nominated for Best Director. Facebook is also a part of our media advertising campaign, and certainly was a huge help while we we’re raising the budget on Kickstarter.

Acting “for – and on – YouTube”: what was the approach, what the issues? How the peculiarity of the chosen medium interacted with acting and with Beckett’s art?

In general performing Beckett requires a unique mindset. It’s not your typical performance, striving for realism and with a solid ‘fourth wall’. Specifically of Godot, there is a history to the absurd aesthetic of Beckett intended.

His characters break the fourth wall constantly for effect a vaudevillian effect, and when he barrels into his extended banter sequences, a very specific rhythm is required. Luckily with our digital format, we could afford infinite takes until I was certain we had captured the perfect take.

The fact that both I and Ron Shelly were cinematographers and performers made those two separate parts of our artistic minds fuse somewhat. We wanted to photograph this classic story from each tramp’s perspective. This meant striving for a look similar to Charlie Chaplin (Beckett’s admitted inspiration for his tramps) when his film’s achieve an ‘of the streets’ quality (particularly City Lights).

We were also inspired by Laurel & Hardy, Beckett’s other key influence for this play. We looked to Italian neo-realism for compositional inspiration — De Sica, Rossellini, Antonioni and Fellini, and particularly the cinematographic work of Gianni Di Venanzo.

Beckett has been probably the first “multimedia” (we already played on Italish with the idea of “Krapp’s last mp3s“) author: did it help or hinder your project? How did you deal with the “multimedia friendly” Beckett approach?

Well, YouTube was the natural choice for our initial distribution. We wanted our cinematic adaptation to mirror the lead character’s circumstances as closely as possible to make the viewing experience as specific to Godot as possible. So our budget was very minimalistic, and our streaming is free to all.

With the internet generation in mind, I felt it imperative to put Beckett’s full uncensored language back into the mouths of Didi & Gogo. In 2014, two educated men who fell from prosperity and were living on the streets of Manhattan for a number of years would have no reservations about saying “fuck” and other obscenities while they’re alone in the middle of the night.

Evidently the english speaking audience couldn’t handle such language on stage in the 50s, but I think the internet audience today can certainly handle it.

What is the current status of the project?

There’s a feature length film version in the works. Season 3 of the series is in post-production and we’re planning a fall release. I’d give a more specific release date, but dealing with Godot you just can’t be that certain.

I am definitely a Beckett fan, but my favourite one is not WFG, it is Endgame… Any hope for it? How would you imagine it, what could be the starting point for Endgame on the internet?

That would be quite the undertaking! Endgame is at least twice as surreal and minimalistic as Godot. Perhaps if the four characters were taken from that room and put in a new setting, one that’s still based in nothingness and repetition without progress… Maybe the floor of the United States Congress?

Joyce on the web 100 years after The Dubliners. Waiting For Godot on the web after 61 years from the premiere. Why Joyce and Beckett are still so important?

Perhaps the two authors were so much ahead of their time in the last century that it took us this long to catch up?

I feel when you read certain passages of Beckett today — the stretches of existential banter for pages and pages — it actually reads not unlike many television scripts of today, particularly the numerous modern comedy shows containing that deadpan-Seinfeld / Curb Your Enthusiam-feel.

Joyce and Beckett asked of their readers and audiences to dwell on some very bleak, modern, and frighteningly existential themes. More than 60 years after Godot’s creation, audiences are more familiar with these themes from other sources when they encounter absurdism.

Any chance to have you in Dublin for an on / off line (While) Waiting For Godot event..? 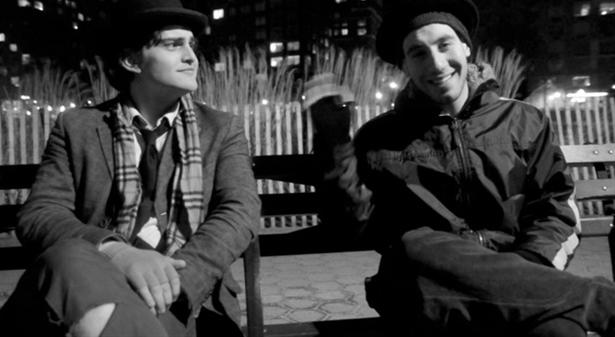 While Waiting For Godot the feature length film will certainly be entered into the Jameson Dublin International FIlm Festival upon its completion.

I respect that festival’s history immensely. And over in England, at the University of Readings, a Beckett Film Festival is in the works, being hosted by the Beckett International Foundation and Samuel Beckett Society.

The Beckett Society recently reached out to us to have our feature screened at the 2015 fest.

Massimiliano "Q-ROB" Roveri writes on and about Internet since 1997. A philosopher lent to the IT world blogs, shares (and teaches how to blog and share) between Ireland and Italy.
@MassiMaxRov
Previous Dubliners again: Carl Finnegan about Two Gallants
Next Musicanti d’Italia: Arpa Celtica – 7 Domande 7 a Mario Lipparini 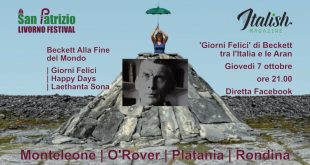 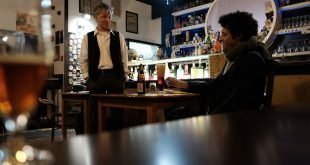 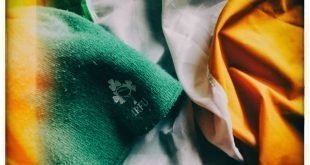 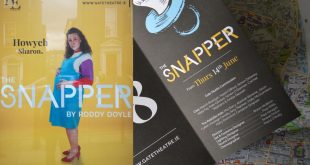