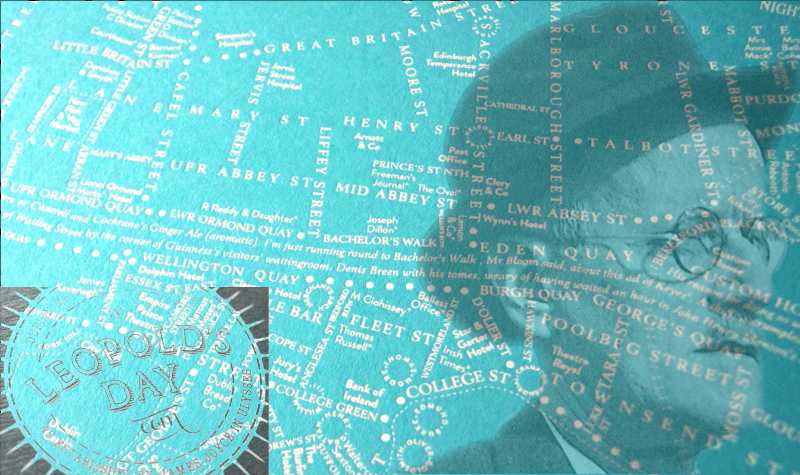 Thank you Rachel, we are very happy to have you on Italish as part of our Bloomsday Special! We had a very “pragmatic” approach in mapping Ulysses: we are using Google Maps to map it… Meanwhile you came out with a gorgeous rendering of Dublin using Ulysses words in Leopold’s Day!

Italish:
First of all: please tell us something about your “previous” adventures with Ulysses: when did you stumble on the book for the first time, when did you read it, and what do you like, or dislike, in it?

Rachel: I bought Ulysses in 2003 when I lived in London, but I never got around to reading it. In 2008, I returned to Dublin and it made its way back with me. I decided to read it then, as a way of reconnecting with Dublin. I had spent almost all of the previous decade living outside of Ireland.

I did find it challenging, however I thought the technique Joyce employed, when using stream-of-consciousness, is amazing to read, as it is such a true reflection of how we think. What I enjoyed most is the sense of the Dublin humour in everyday observations in what is an incredibly visual novel. 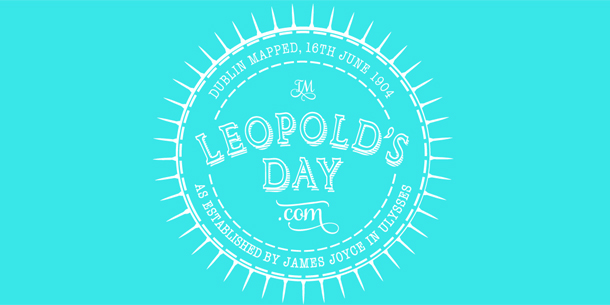 Italish:
What are your Ulysses‘ favourites? (Characters, places, situations, quotes…). And how did they find a place in your map?

Rachel: As a Dubliner, what resonates most to me in Ulysses is the descriptions of Dublin and the rich characterisation of those described in everyday scenes. Joyce’s word-smithing really captures the spirit of the city and its people. I loved reading about a by-gone Dublin, but at the same time, a lot what Joyce conjured up can be seen on the streets today.

Leopold Bloom is obviously one of my favourite characters but it is really difficult to pinpoint specific favourites as there is so much! The Leopold’s Day map is a distillation of all that was real and in existence on the day in Dublin. The only part of fiction within the map are the waterways (Dublin Bay, the canals and the Liffey). These are formed from Ulysses extracts which are specific to Dublin, so most of my favourites made it into the map through the waterways!

Italish:
When did you start to think about the project?

Rachel: The idea came to me very randomly one day in August 2009. I began work on it within a couple of days.

Italish:
How much time did you employ to accomplish it (and in how many steps?)?

Rachel: I worked on it over three year period. I did come close to quitting it on a couple of occasions, but it was the time that I had put in that prevented me from doing so. However I am really glad I saw it through as the reaction from people is incredible.

Firstly I had to compile all the Dublin references and within them establish all that was real. The map plots only the places and premises that were real and in existence on the 16th June 1904. The first draft of the design began when I had established all this data. I decided about a year in to add in the directory which sits underneath the map. This comprises over 400 entries of premises and people, listed street by street. I spent a lot of time in the National Library, cross referencing everything again from the 1904 Thom’s Directory of Great Britain and Ireland, which is what Joyce used. From then it was constant fine tuning, followed by proofing, refining and finally having the map sense checked by a Joycean scholar before sending it off to the printers which was nerve-wracking! 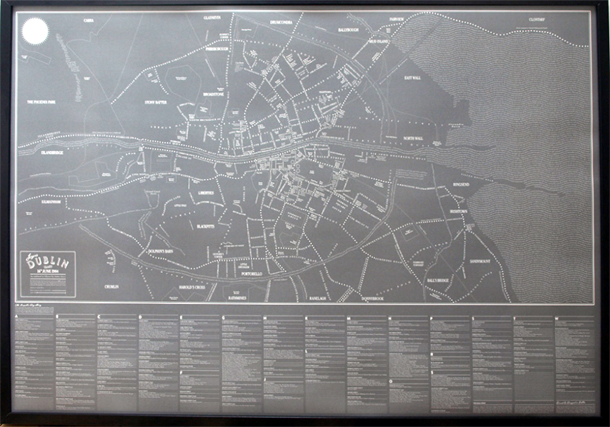 Italish:
What help did you have from the team (and how did you put up the team?)?

Rachel: I was excited about the project from the start, so only told very close family and friends. Three or so months before launching, the volume of work was snowballing. I was so engrossed in the design, detail and production that I hadn’t spent any time on the other aspects of launching a business. My sister, Gemma, nominated herself to become Project Manger. She lives in Toronto and I woke up one morning to find a full list of everything that was in my head and needed to be done. She has been really amazing and brought an incredible amount of focus to Leopold’s Day. My brother, Allan, came on board to build the website. A lot of the proofing was done by my sister and my dad, Paul. Nicola Reddy, a friend of Gemma’s, helped with the final proofing as she works in publishing. Finally I approached Robert Nicholson who is curator of the James Joyce Museum to look at it from a Joycean perspective. A friend from work, Tony Matthews, did the photography and I have also been working with two incredible mentors from the Dublin City Enterprise Board. Without these people and the support of other close friends, I wouldn’t have been able to launch Leopold’s Day.

Italish:
How did you approach the huge corpus of Ulysses to extract the data that you needed?

Italish:
What were the technical issues in “deploying” Ulysses‘ words in such a manifold environment? And how did the used medium influence the “building” of the map?

Rachel: The map is as faithful a rendition of Dublin city centre as I could manage. So once the data had been established, locating these areas on the map was relatively straightforward, with the exception of some of the old names and references Joyce used, which took time to find. Also the coastline of Dublin has changed since 1904, so trying to find records of the coastline that was in existence then took a bit of time. The Ulysses extracts which form the waterways are placed as close as possible to their corresponding geographic locations, so they don’t appear in sequential order. 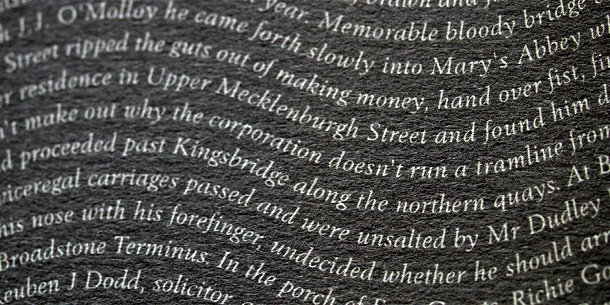 Italish:
We are very near to Bloomsday: what are the Leopold’s day’s plans for the celebration?

Rachel: They started on Sunday evening with an evening in the Martello Tower in Sandycove listening to music played on Joyce’s original guitar which has recently been restored. This evening I met Steve Cole from Liberate Ulysses who is in Dublin for what has now turned into Bloomsweek celebrations. On Bloomsday itself there are no firm plans at the moment apart from dipping in and out of the many celebrations around the city.

Italish:
What feedback are you having from Leopold’s Day?

Rachel: Very positive. I get lots of lovely emails from people who have bought the map and love it. I also get told from a lot of customers who haven’t read Ulysses that it has inspired them to read it, which is really great.

Italish:
Do you have some funny or strange story about Leopold’s Day Maps customers?

Rachel: The vast majority of my sales are online, so unfortunately I don’t get to meet many of my customers. One lady from Denmark emailed me a couple of months after she had bought the map to ask if the waterways deliberately looks like a side profile of Joyce. She has the greatest imagination of all my customers!

Italish:
A question that we are often asking to Irish Artists in our Italish Interview: we have from abroad the feeling that Ireland takes care of culture and arts, and that culture and arts are used as weapons against the economic downturn. Your feelings and opinion about that?

Rachel: Speaking as a designer, I think that designers and the design industry always seems to thrive in economic downturn. People are forced to be more creative when budgets are cut. Visiting Dublin during the economic boom, I thought that the city seemed to have lost its way creatively. But in the last couple of years I think that there has been a complete resurgence in creative thinking and Dublin is now is a really inspiring and exciting city with lots of talented designers embarking on great projects. 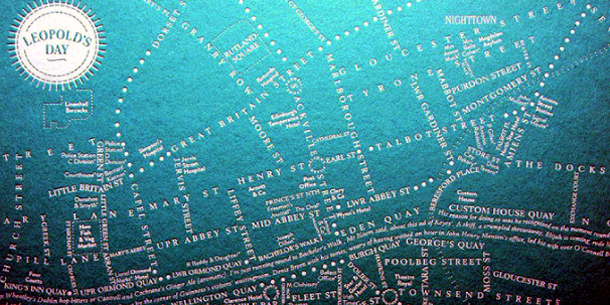 Rachel: The Miniature Leopold’s Day Map was launched at the start of the year. This is a lovely foil blocked crop of the city centre. It is on a turquoise board, inspired by the first cover of Ulysses. Leopold’s Day is also expanding into retail, so as well as the maps been available from www.leopoldsday.com the Miniature is also available in some of the design stores in Dublin. There might be a fold down map launched later next year or earlier next year… and I have one or two other ideas, but nothing concrete yet!

Massimiliano "Q-ROB" Roveri writes on and about Internet since 1997. A philosopher lent to the IT world blogs, shares (and teaches how to blog and share) between Ireland and Italy.
@MassiMaxRov
Previous Ridisegnando l’Ulisse: intervista a Rachel Kerr
Next Telmetale Bloomnibus: con Nuala Ní Chonchúir e Alan Jude Moore