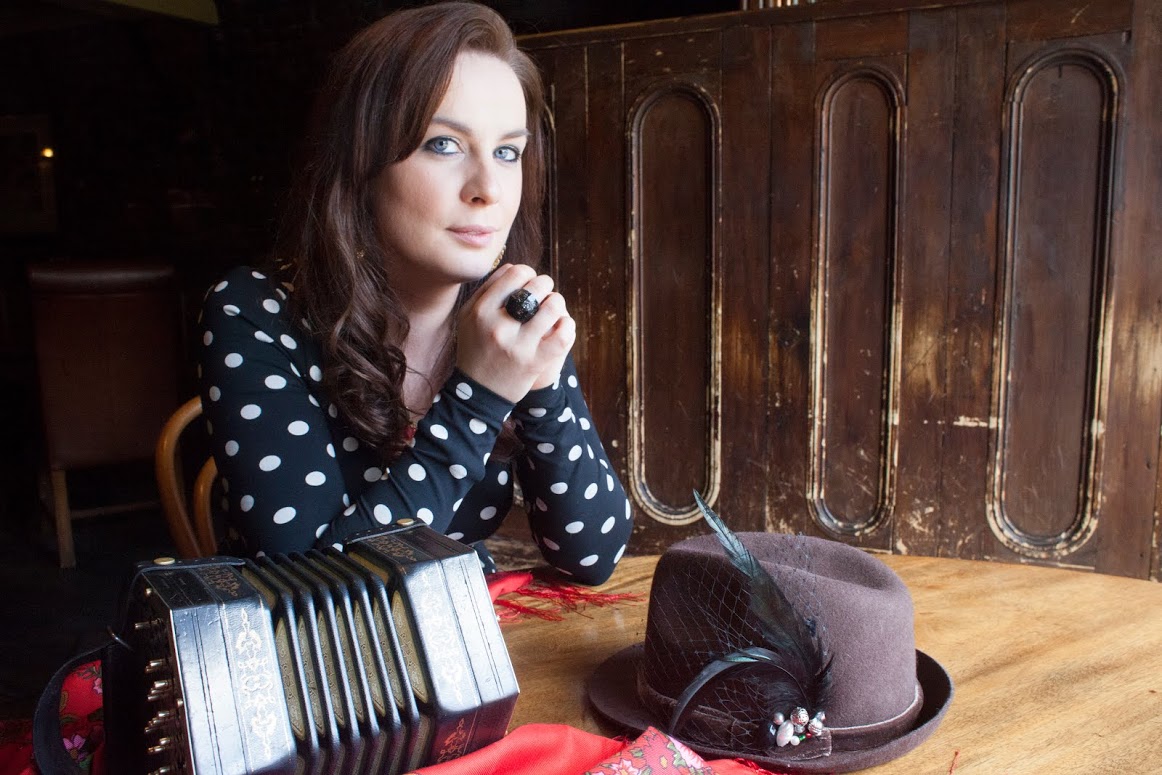 Edel Fox and her concertina are definitely playing an important role in the Present of Irish Music.

So, it is with great pleasure that we meet her for our new interview about Irish Music.

Edel Fox is from Miltown Malbay Co. Clare; she met for the first time a concertina when she was 7 years old, and she didn’t abandon it anymore.

In 2004, Edel was awarded the TG4 Gradam Ceoltóir Óg na Bliana (Young Musician of the Year) and her popular 2010 solo recording “Chords and Beryls” has gone on to receive critical acclaim. But it is her last album recorded with the Waterford fiddler Neill Byrne that gave her an outstanding popularity in the world of Irish Trad.

“It’s impossible not to like The Sunny Banks, and it will probably be in my Top Ten for 2013.” (Irish Music Magazine) “With its faultless, lively playing and range of beautiful tunes, The Sunny Banks is destined to become one of the classic albums of traditional Irish music.” (The Living Tradition Magazine) And the famous Trad Connect website awarded it with the award “Album of the Year“.

Let us ask Edel what is behind this great success:

1. Dear Edel, your last album recorded together with Neill Byrne “The Sunny Banks” has been awarded as the TradConnect Album of the Year 2013. Can you tell us something about your choices of the tunes you selected for this album? What do you think is behind this success?

Neill and I have always had an interest in researching tunes, whether it be from old recordings, newer recordings or music books. Luckily there is an endless supply of great tunes to be found within the tradition! Having done most of this research together over the years, we found that we had a similar interpretation of most of the tunes chosen for the CD.

There are compositions from John Dwyer, Finbarr Dwyer, Tommy Peoples, Charlie Lennon, Joe Liddy, Lorna Davey, Frank McCollum, Paddy O’Brien and myself throughout the CD and these tunes are interspersed with older tunes which we learnt from some of our musical heroes as well as finding others in manuscripts. The reason behind its success? Well, I guess everyone likes to get an album with loads of tunes and I suppose “The Sunny Banks” has plenty!

2. You are rightly considered a superb concertina and fiddle player in the world of Irish Trad: have you noticed and increase in the interest of the audience toward this kind of music? If so, how do you explain it?

Irish music is amazing – it is loved all over the world! It is no longer something confined to the homes in rural Ireland – there is a huge international appeal and the demand for touring bands and musicians to perform on the worldwide stage has never been so big. Nowadays, many traditional musicians are making a great ‘living’ from performing the music they love so much. I think the reason behind the huge interest is as much to do with the personalities of Irish traditional musicians, as the music itself.

The music is full of vibrancy – from the slow sombre melodies to the rousing reels. The instrumentation is so diverse, with many bands having everything from uilleann pipes to concertina to guitars and bouzoukis. I also notice that within Irish music itself, there are many ‘sub-genres’. Our music would be very different to some of the more modern bands, but there is an audience for us all!

3. Born in Milltown Malbay, Co. Clare, living in Waterford; how have these places influenced your music?

I am so lucky to come from Miltown Malbay, Co. Clare! I grew up in an amazing musical environment where I saw the likes of Noel Hill, Jackie Daly, Paddy Glackin and more play music regularly in the local pubs. As home to the Willie Clancy Summer School, Miltown attracts thousands of musicians every July for a week of brilliant music, song and dance. The great thing about Miltown though, is that there is fantastic music all year round.

I was hugely influenced by the music of people like Bobby Casey, Joe Ryan, the Kilfenora Ceili Band, Mrs. Crotty – all from Co. Clare. Nowadays, I still consider my music to be very much rooted in the tradition of West Clare.

In 2011 I moved to Waterford, where I play with Neill Byrne (my partner!) all of the time. There is a fantastic (smaller) music scene down here and we are lucky to play with some fantastic musicians from the city and places like An Rinn on a regular basis. We both organise a festival here called the “John Dwyer Trad Weekend” which takes place every October.

It is now going into its 3rd year and it fast becoming one of the best trad music weekends of the year! We decided to call it after John Dwyer because he is very much part of our group of musicians in this area. John, now in his 80s, is from the famous O’Dwyer family of composers in West Cork. He now resides in New Ross, Co. Wexford, which is only 20 minutes from where we live. Like his brothers Finbarr, Richie and Michael, he has composed some of the most beautiful tunes in the Irish tradition. We thought it would be nice to call the festival after a person that is so important to us and is still playing in Waterford all the time!

Everybody who comes to the festival loves to meet him, and if they are lucky, play a tune with the man himself! Another reason I enjoy living in Waterford is that I have some wonderful concertina and fiddle students. I teach most evenings and get great enjoyment from seeing the standard of music amongst the youth here grow and grow. I have no doubt that Waterford will be the ‘place to be’ in the future for traditional music!

And now are usual 4 questions to help our readers to know better the culture of the Emerald Island; we would like both of you to answer to these questions, since they are quite personal ones.

4. What kind of music does Edel like to hear? What is on your player right now?

There are so many classics that I will never tire of such as Noel Hill and Tony Linnane, Paddy Carty and Conor Tully and Paddy O’Brien with James Kelly. As regards newer albums – I am a huge fan of Mick O’Brien, Peter Carberry and Padraig McGovern and anything from Tim Collins! Dublin band “The Bonnymen” are frequently on in my car/iPod these days.

I am a big fan of singing. I love the songs of Dick Gaughan, Richard Thompson and one of the most played CD’s I have right now is simply called “Child Ballads” by Anais Mitchell and Jefferson Hammer – its absolute heaven!

American duo “The Civil Wars” are a regular feature of my car journeys also.

One of the nicest books I have seen in years is called “Vanishing Ireland”. I bought it as a Christmas present for my dad a few years ago and it features the most beautiful and interesting stories from members of an older Irish generation.

The book gives an account of various aspects of Irish life, which has changed dramatically over the years such as industry, farming, housekeeping and family life. The reflective nature of the stories, coupled with the stunning photos makes for very powerful reading

6. Italy – Ireland: it seems there is a special bond between these 2 countries (at least from our point of view). Thinking of Italy, what does come to your mind? What do you know, like (or not) of this country?

I LOVE Italian food – I really do! But…. I have never been to Italy! Someone give me a gig! I’d love to go someday!

7. Any other projects for your future? What would you like to be when you grow up?

Ha! Well I have nearly grown fully now I think – I hope!

At the moment, I am really enjoying my work in the TV industry. I work as a researcher and producer and I am so lucky to work mostly on music and cultural programmes. I am very passionate about my work and enjoy the fact that music and the arts are a big part of it. My ambition for the next few years is to produce an award winning documentary! For now, I am lucky to work with a couple of different production companies on great programmes for TG4.

Musically, I hope to do some more tours and see more of the world. The great thing about playing music with Neill is that we get to do most of this travelling together, playing music that we absolutely love. For the next year, I have several gigs and tours, including a trip to Japan for 10 days with the Irish Embassy – I am really looking forward to that! Also, I am performing with a new quintet called ICE (Irish Concertina Ensemble) featuring other concertina players Caitlín Nic Gabhann, Padraig Rynne, Tim Collins and Michéal Ó Raghaillaigh.

It is a very exciting new venture in which we explore the concertina and all of its facets. We play a mixture of newer compositions and older traditional ones, harmonising and using the concertina in a percussive way also. We have a new CD coming out in 2015 which we are all really excited about!