Three times winner of the All-Ireland Fleadh Cheoil on concertina, and also an accomplished dancer and in 2009, joined Riverdance as troupe dancer: our new interview about the Present and Future of the Traditional Music in Ireland is with Caitlín Nic Gabhann. She is a great concertina player and dancer, a 360° artist, with a brilliant future and a great present. 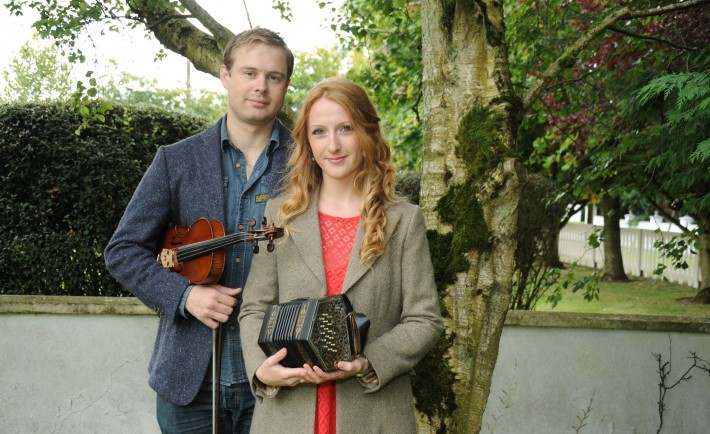 Caitlín’s debut album has been awarded as the Album of the Year 2012 from TradConnect’s public. Even on The Wall Street Journal, the music journalist Earle Hitchner wrote: “Of all the many fine Irish traditional albums released in 2012, hers is the best. Caitlín gets my vote as the top Irish traditional album of 2012.” Let us try to know her better and to introduce her to the Italian public:

1.      Dear Caitlín, your debut album Caitlín, seems to be really appreciated in Ireland and abroad; it has been awarded as the TradConnect Album of the Year 2012. Can you tell us something about your choices of the tunes you selected for this album?

The music on this album is a mixture of traditional and original material. I grew up learning traditional Irish music in the way it is mostly taught in Ireland – by ear. I learned the old tunes that have been around for centuries from my father and from my concertina teacher and from going around Ireland playing in sessions and listening to older players. This way, you can learn the internal ‘swing’ and rhythm and phrasing that is present in Irish traditional music. That thing that makes you ‘tap your foot’ along with the tune. These features cannot be notated on paper. It is an oral tradition. So I wanted to include lots of older tunes on my debut CD – tunes I learned growing up from my father and my other favourite players. But also, I wanted to include some of my own compositions. There are six original tunes on the album and I’m delighted with how they have been received by listeners. It has been a thrill and a relief! It’s nerve-wrecking releasing your first solo CD.

That’s hard to answer, but I suppose I could say I’ve listened a lot to traditional music players all my life. There is always music at home and all our school holidays were spent going to music festivals around Ireland with my family. There was a lot of listening!

3.      You are rightly considered a superb concertina player and great accomplished dancer; how can you explain your ability and passion for both of them? What are the things in common between these 2 interests?

I grew up learning to dance and play the concertina in equal measures. There are different types of dance that I grew up with: traditional step dancing classes (like what you see in ‘Riverdance’) and set-dancing. Set-dancing involves a set of 8 people and it is very popular in Co.Clare, where there is a distinctive ‘battering step’ danced in the set. My mother grew up with this style of dancing. Her parents came from Co.Clare and they were set-dancers. My mother taught me this battering step and how to dance sets. A ‘ceili‘ is a gathering where a ceili-band would play on stage for the night for a hall full of set-dancers. My mother brought me along to ceili’s with her from when I was 5 or 6. I was always her partner in the set and this is how I learned. The beat and the rhythm I learned at these ceili’s (the ‘battering’ step) and how it fits in with the music has had a huge influence on how I play the concertina. Learning to dance has influenced how I learn the concertina (in terms of rhythm and phrasing) and also, learning to play music has helped me in my dancing (rhythm, timing). They complement each other! I am passionate about what the dancing can bring to the music and vice versa.

4.   Your father is a fiddle player and your mother is a dancer; how much influence did and still do they have on your life? How can a passion be transmitted to a child?

I used to fall asleep in bed listening to my father teaching fiddle lessons in the house a couple nights a week. And my mother is always dancing. There are often musicians calling to our house and once every year, my parents host a ‘housedance’, a tradition that is dying in Ireland. At a ‘housedance’, musicians gather in the home, as do set-dancers and the music, singing and dancing goes late into the night. At these nights, the dancing takes priority… The music that is being played is for dancing to, not just for listening to. These nights are great fun and often don’t finish until 7am! There is tea and coffee and sandwiches and cake served all throughout the night and everyone goes home happy. All our school holidays were spent going to music festivals like the Willie Clancy Summer School in Miltown Malbay, Co.Clare and the Fleadh. We’d make friends at all these festivals and look forward to seeing them again at the next festival. This way, we were encouraged to practice our music and dancing at home in anticipation of the next festival and playing with your friends again. It’s very exciting. And you easily become very passionate about the music. I’m lucky that my parents are so passionate about the culture and that this passion has been passed on to my siblings and I. In transmitting passion to a child, I think the younger the better. If they are hearing the music from when they are babies, they will always be drawn to it. Saying this, there were lots of times when I didn’t want to go to my music lessons and locked myself into my bedroom to avoid going! But my parents persisted, and encouraged me not to give it up. And am I glad!

5.  What kind of music does Caitlín like to listen to? What is on your music player right now?

Believe it or not, 99% of the music I listen to is traditional Irish music. I’m a trad-nerd! A lot of listening… some of it sinks in!

6.       Italy – Ireland: it seems there is a special bond between these 2 countries (at least from our point of view). I know you came to Italy more than once, especially to play and dance together with The Birkin Tree. Thinking of Italy, what does come to your mind? What do you know, like (or not) of this country?

What do I think of when I think of Italy? Tomatoes. And pasta, mozzerella, and Parma ham, and bread, and olive oil and the best red wine! I love the scenery, the views. What do I not like? I love Italy but maybe the drivers are a bit crazy!!! But I love Italy. My favourite country (outside of Ireland).

7.      Any other projects for your future? What would you like to be when you grow up?

When I grow up? I hope to be doing what I’m doing now – playing and composing music and choreographing dances. I like to match dances to particular tunes (to dance the beats to match the phrasing of a tune) so I’d like to do more of this. You heard the joke about the musician who won the lottery? What did he do? He went on tour (playing music concerts) until he had spent all the money! :) But MOST of all – what I’d like to do in the future – Spend more time in Italy!! ;-)

Obviously, we are waiying for you here! Next appointment on an Italian stage should be on February 2014. If you have the chance, don’t miss the opportunity to listen to and watch a true artist of the Traditional Irish Music.