September’s appointment with the Irish Music’s Present and Future gives us the opportunity to meet Niamh Dunne, the voice of Beoga, that according to The Irish Echo is “one of music’s best young singers”. Niamh is a singer and fiddler who comes from Limerick, and in the last seven years has been a member of Beoga, one of the emerging band more appreciated in Ireland.

Niamh Dunne has recently realeased her first solo album Portraits, with good results: the Irish Music Magazine wrote that “is a highly woven affair with evocative arrangement “ that confirms Niamh’s reputation as “a formidable force in the Irish music scene”.

We have spent some time with Niamh to know her better; this is what she told us: 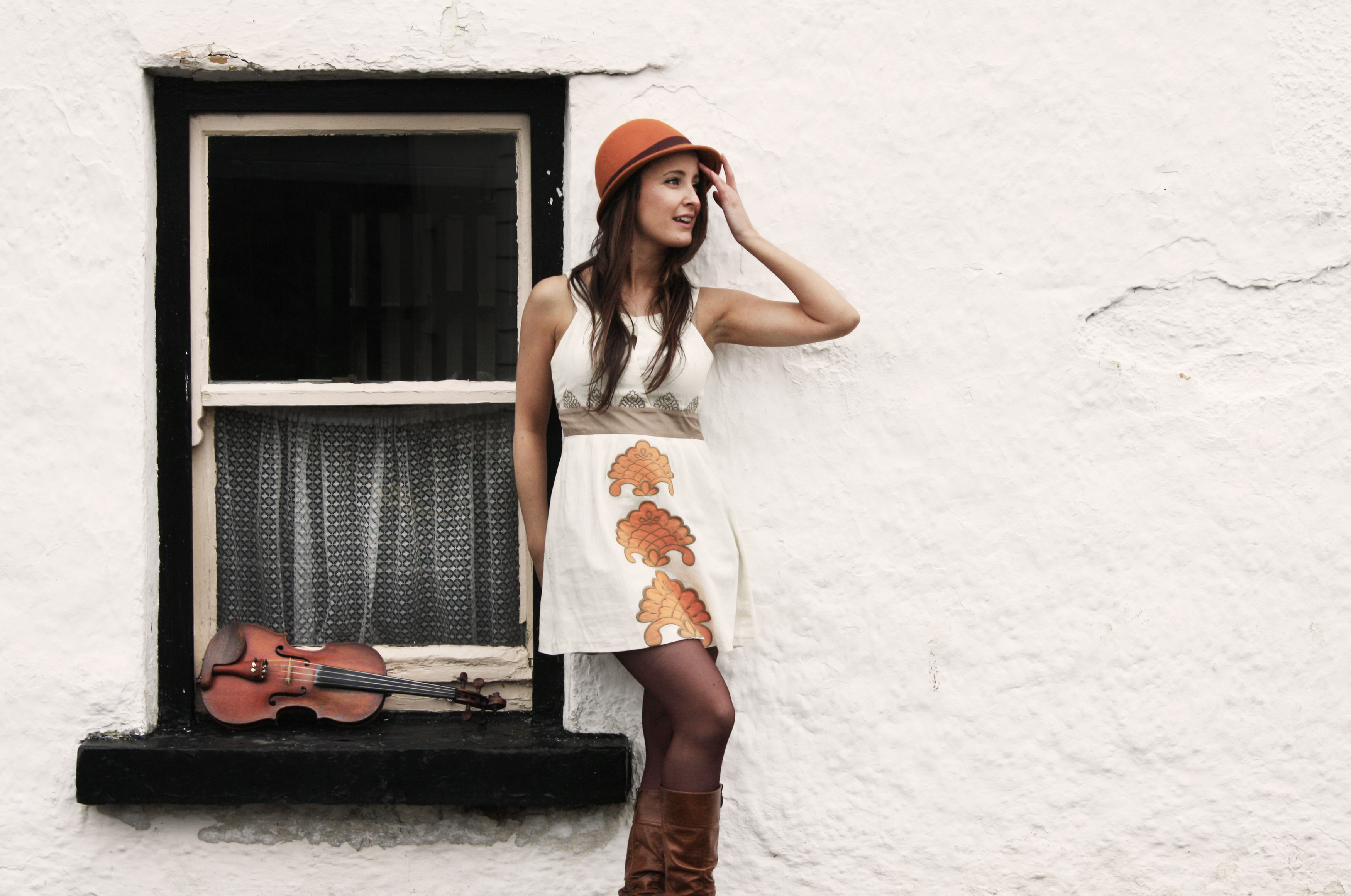 1. Dear Niamh, your debut solo album, Portraits , arrives eventually (and ﬁnally, from my point of view) after 7 years of collaboration, that still continues, with Beoga, deﬁned by the Wall Street Journal “the most exciting new traditional band to emerge from Ireland this century”; why did you decide to record a solo album?  What have you motivated to do it?

I have wanted to do a song album for ages! I’m very lucky with the band Beoga, the lads have always been very keen on making the songs that we perform and record a part of the band’s sound, so that it is consistent with the overall sound of the band and still very personal to me and to what I like to sing. It was always a team effort, and that respect and interest in songs is a lovely thing for a singer to have in a predominantly instrumental band. They’ve taught me loads about how to go about arranging a song and how to chose what suits me as a singer, and I could always try something that might seem a bit of a strange choice, the lads would give it a blast! I went down to Ventry in Co.Kerry last July with Sean Og Graham and we spent a few days just going through songs and trying different things out, but only really got into recording it properly in January. It was a great place to take some time out and just concentrate on the whole idea. We stayed in a little wooden cabin with no telly or internet and just got really into it. Kerry is a massive influence on my singing, as I spent all my summers there as a kid. There are amazing singers down there, Muireann Nic Amhlaoibh and the Lumiere girls, Seamus Begley, Josephine Begley, and Aine Leahy, and I definitely got lots of confidence and a great appreciation and love of songs from the people down there.

1b. Actually you come from Limerick; how important is your city to you as a musician?

I’m really proud to be from Limerick, and really proud of our musical heritage. We get a bad reputation, so I wanted to show another side to my home town with the album, and in my own small way to represent the good side of Limerick,  I have 5 songs on the album that are from Limerick or about Limerick, and it’s been really interesting looking through the archives and listening to recordings of our great singers, like Con Greaney, Ann Mulqueen, Donnie Nolan, Nora Butler. I don’t know these singers personally, but have listened to them a lot recently. I found songs that were completely new to me, and I’m delighted to have a chance to sing them.

2. Can you tell us something more about this album and the choice of the tunes you decided to include?

There are loads of brilliant albums coming out at the moment which is mighty for Irish music in general and the scene at large, and it’s a great thing to be part of that, there’s a buzz. An album is a snapshot of a musical expression, people go through many different creative stages throughout their lives, and this is a portrait of where I am as a singer right now. It’s a record of where I’ve come from musically, and how I’ve grown as a performer and a singer. I love songs, and telling a story, and this album is a chance for me to really delve into the songs that i love. I’ve played the fiddle all my life, and play a lot on this album as part of the arrangements of the songs, but I wanted to focus on singing for my first album. It’s a newer venture for me, as I only really started singing in my late teens. I’ve become very interested in songs and singing, almost obsessed, particularly since i started singing with Beoga, and making this album is something I’ve been talking about for a while now. I’ve met so many great singers on the road, and had loads of sing songs along the way, and this has kind of inspired me, too. I’ve finally decided to bite the bullet and the journey has been a real learning curve for me. I’ve learned so much and have been very lucky with the great singers in Ireland that have helped and encouraged me all the way along. I’m really loving exploring songs and being part of the brilliant singing scene that’s in Ireland at the moment.

2a. Let’s talk about songs.

I have a mixture of songs on the album. I have a few great traditional songs from Limerick, a few songs as Gaeilge which is a totally new venture for me, some newer folk songs and a mixture of ballads and more up tempo stuff. I only really got into singing in the last 10 years or so, and I’m obsessed with songs now. I’m a bit of a folky, I love a good story, and these are the types of songs that grab my attention and that I love singing. Sean Og Graham is the guitar player and one of the accordion players with Beoga and he has a studio in Antrim where we recorded the last Beoga album, “How to tune a fish”. He played on the album as well as producing and engineering it, so he’s been a massive part of the whole process and a brilliant person to work with. he has amazing patience and a great set of lugs on him, so his contribution has been invaluable really. I’ve been singing with him for a long time, so we have a sort of musical understanding at this stage which made recording a very natural operation.

3. What types of songs draw you to them?

A good story! I sing love songs, songs of war, songs with a message or a theme. A lovely thing about being a singer in Ireland is the community of people that sing in this country. People are very generous with songs and sharing them, this has always been part of our tradition here in Ireland. There’s huge respect for what has come before and been passed down, and also amazing song writers of recent times that are constantly composing fantastic songs that have a sense of timelessness.

3a. With Beoga you played in many different countries; Traditional Irish music still attracts a lot of people. Out of your own experience, what does people like in traditional music?

Irish music has a lot of soul and a deep rooted history. I suppose people all over the world can relate to that. It’s incredible to travel around the world and experience first-hand people’s reactions and involvement with the music, the song, the dance. there are musicians from all far flung corners of the globe playing exceptional music. It’s also lively and fun, so I think this encourages people to get involved and enjoy traditional Irish music. 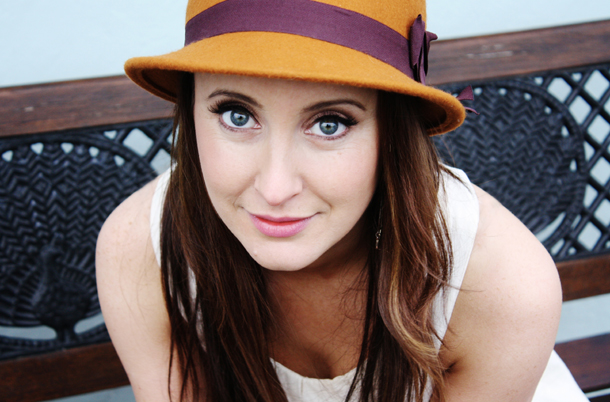 4. What kind of music does Niamh Dunne like to hear? What is on your CD reader or MP3 player right now (apart from Portraits)?

I’m a real folky! I love Sandy Denny, Paul Brady, Joni Mitchell and Judy Collins. But I listen to all sorts, same as most people these days. I love Nat King Cole and Dean Martin, Michael Jackson, Chic, Paul Simon, Nirvana, Smashing Pumpkins, Mozart! A real mix of things, that’s the beauty of music! It’s so accessible now, so you can listen to whatever strikes your fancy. Irish music, I love Moxie, a new band from Sligo and Limerick, and I love Cathal Haydn and Mairtin O’Connor. Damien O’Kane, The Whileaways and Lumiere are my singer favourites at the moment.

We like to have a good time! We are going through a difficult time with the economy at the moment, but we’ll be ok, we always are, and it’s not our first time facing hard times. I think since the recession there has been a shift back towards culture and the importance of it, so from adversity can come positives.

6. Italy – Ireland: it seems there is a special bond between these 2 countries (at least from our point of view), probably beginning with our forefathers who immigrated in America, or even before. Thinking of Italy, what does come to your mind? What do you know, like (or not) of this country?

Good food, good wine, good weather! I love Italy, it’s one of my favourite places to tour. We always come home a bit fatter and happier than on the way over. The people are great, they are indeed similar to the Irish. I like the passion and pride Italians have in their country. I also love the attitude to food, good honest food that you take your time to eat and to share the experience with family and friends. Lovely! After music, my second love is cooking, so Italy is perfect for me! 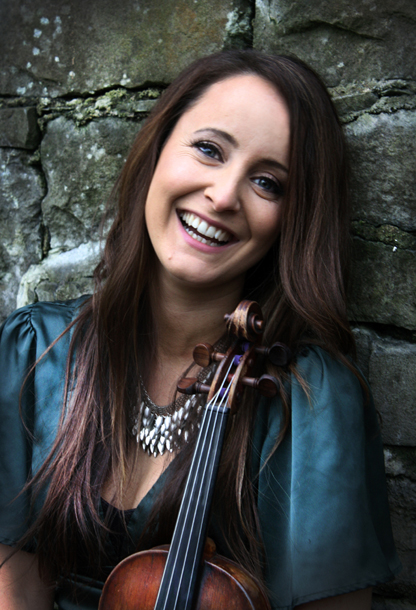 7. Any other projects for your future? What would you like to be when you grow up?

Beoga are bringing out a live DVD and CD in August. It is a recording of our 10 year anniversary where we had a lot of great friends and musicians play with us, such as Alan Doherty (Grada), Niall Vallelly (Buille), Martin O’Neill, Clodagh Warnock (Deanta), Brid Dunne (my sister!) and Trevor Hutchinson (Lunasa).That will keep us busy for the rest of the year, with touring and promoting that. I wlil be doing some more gigs with my own band and Portraits, I have a great band, Sean Og Graham, Donogh Hennessy and Trevor Hutchinson. I’m very lucky, the gigs are rocking!

We thank Niamh for the lovely time we spent together; our wish is to meet her touring in the Italian roads, and  even better on an Italian stage. Slán go fóill!!