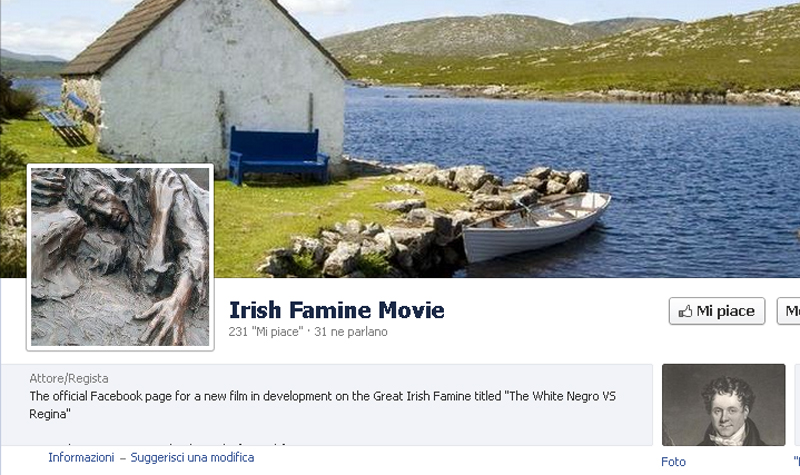 New Movie on the Irish Famine – we need your support No other event in Ireland’s long history is so deeply rooted in the Irish psyche that the Famine, there is a deep sense of injustice that is shared by generations of Irish People and a longing for justice on behalf of the millions who starved and emigrated.

We are currently developing a new feature film on the Irish Famine; this is not a film about the blame game, but rather an analytical look at the evidence on the root causes in an objective manner. Although some elements of the film are dramatic, nothing about the facts or evidence of the famine will be fabricated, false or exaggerated in any way.

The title of the film is The White Negro – VS Regina. This tells the story of an Irish Filmmaker who produces a documentary about the History of Ireland, when he completes and releases his documentary film he is immediately besieged by a hostile British Media who make his life a misery.

Many of the media stories about the filmmaker are along the lines of what we would normally expect from the British Tabloids. In one of these articles our filmmaker is branded a fantasist by a member of the British Parliament; in another article a member of the Royal Family dismisses his film as a work of fiction.

The filmmaker decides to take a libel action against the Member of Parliament and the Royal Family, hence the title The White Negro – VS Regina. The film follows the filmmaker’s efforts to build a credible case for the libel action and through the mechanism the film will take an analytical look at the evidence from all sides on how and why the famine occurred and if the government of the day were culpable in any way, either for the root cause or for the worsening of the situation.

We are just getting started in the screenplay for the movie, we would ask if you could please support us in this endeavor and/or direct us to any groups or individuals who may be interested in getting involved. This can be in a number of ways from promoting, helping with research or financial. Any and all assistance would be very much appreciated.

Tags an Gorta Mór The Famine

Massimiliano "Q-ROB" Roveri writes on and about Internet since 1997. A philosopher lent to the IT world blogs, shares (and teaches how to blog and share) between Ireland and Italy.
@MassiMaxRov
Previous Solas in Irlanda!
Next Sinéad O’Connor a Roma: The Crazy Baldhead Tour