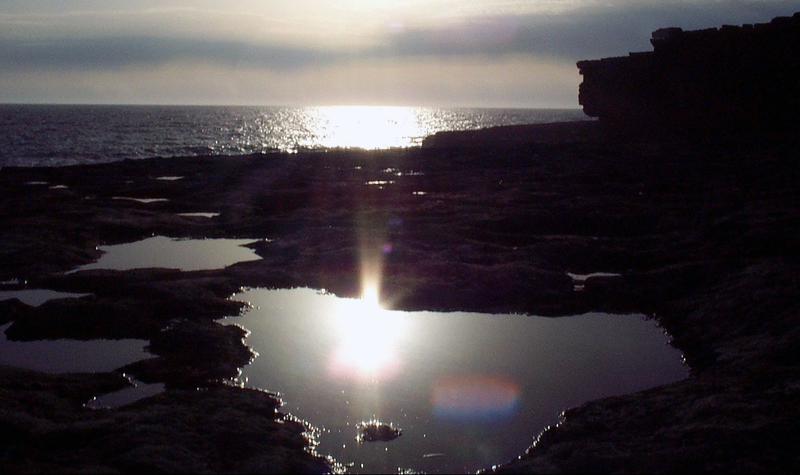 When the Devil comes to Inis Mór

They should have realized I was there simply by looking to the left side of the Bóithrín. Because the grass withered under my shadow. But they never see me. They don’t look, so they don’t see. The funny thing is that they see me where I’m not…

I hadn’t been in Ireland since a long, long time. And it was just my second trip to Inis Mór: the Island of Saints is not my cup of tea, for sure…

The other dude… or better: The Other Dude is luckier. He is whenever & everywhere. Just like the Internet… God doesn’t need to go anywhere because He is already there. So only the Devil has to travel.

I bought my ticket in Galway yesterday, I arrived this morning on Inis Mór from Rossaveel. I will not tell you what I have done in Galway, throwing myself in the middle of ceol agus craic. It’s better if you don’t know that. Especially if you too were in Galway last night…

I have been seasick aboard the Banríon na Farraige. Well, I personally know the Queen of the Sea, and she is a ship sinker, not a ship! And of course I wasn’t sick because of the sea: it was because of the smell of Saints from the Island. Unbelievable, it’s still there!

Of course I don’t like to walk under the shadow of a cross, so I avoided the tourists’ walk and I crawled the slope between a pub, the only MacBurger (a close friend of mine is CEO of the Company) of the Island, and the (little) mall.

The view of a ruined church made me feel better.

I know He is everywhere, but dialectics between supernatural beings have their peculiar rules. And soul rights need tons of rules. I needed to speak with Him about a soul. A soul that should have been mine, but also a soul with which I was experiencing a problem.

And the problem was linked to Inis Mór: it had to be solved on Inis Mór.

I had met the guy twenty years ago. In Dublin Airport. I like airports: lot of work to do, there. He was in the gents toilet and he was crying in front of the mirror. He was so upset he didn’t even realized that I wasn’t in the mirror.

I asked him why he was so upset.

I gave him a solution, of course.

He signed the Contract just a couple of minutes later. He presented me with the pen. It was a throwaway pen from a hotel in Galway. Blue, it was. I should have realized he was weird. You can’t present the Devil with a throwaway pen…

The deal was simple (my deals are ever simple…): twenty years on Inis Mór for him, his soul to me for the Eternity. Or better: until the End of Times.

The guy died two days ago. Procedures are quite simple in this case: you had signed the contract, your soul comes to Hell. But something has gone wrong, this time.

I shivered when I have heard him laughing in the Hell.

I asked him why he was laughing. How was it possible? He told me he had tricked me. He told me the memories of his twenty years on Inis Mór were enough for him. Enough to smile in Hell…

I’m a gentledemon, above all. But it was impossible to imagine being tricked by a guy who was crying in the gents. The Other Dude, maybe..?

So I have called Him: helloupthere,thisandthat,terrorismandchildabusesI’mwinning… I asked Him about the Guy. Not His business, He told me.

Not in My team, He told me (I do really hate Him because HE SPEAKS IN CAPITALS…).

– I don’t want a laughing guy in the Hell!

– But what’s so special about Inis Mór?

I felt Him smiling before speaking.

– I made quite a masterpiece there, Devy Boy. Take a look there. The guy is not in my team, but it seems he knows a couple of things better than you…

The you was spoken in lower case: I felt it.

I hanged around all day. At sunset I was on the cliff over Poll na bPéist. If you think it’s natural, you are wrong: I cut out the stone throwing it against Saint Enda. I still can’t understand how it come out he didn’t die!

The sky become tangerine, and the stones bloody red.

All right. I admit it. The sunsets are bloody marvelous, You Old Bastard. Satisfied? [Gaiman, Season of Mists, 8].

I felt His smile in the green beam.

Tomorrow I’ll free the guy. He’s not my business.

On the way back from Poll na bPéist I cross the village of Gort na gCapall. A dog in a garraí is desperately barking at me. An old lady comes out from the cottage. A very old one… She asks me where I am from.

Then she asks me if I liked the Island. I tell her that Inis Mór is beautiful.

She tells (to) me, while the dog is still barking.

This short story is dedicated to the woman who really spoke with us in Gort na gCapall. She really told us  Inis Mór is second Paradise. And we agree with her! I hope someone on the Island will have the chance to tell her she has been framed in this short story.

A very special thank to Sanja, my favourite English-stuff editor!

Thanks also to @MrSaulVerner, because he is a friend and he got involved, somehow, in this short story.

And, well… Thank you to Neil Gaiman!