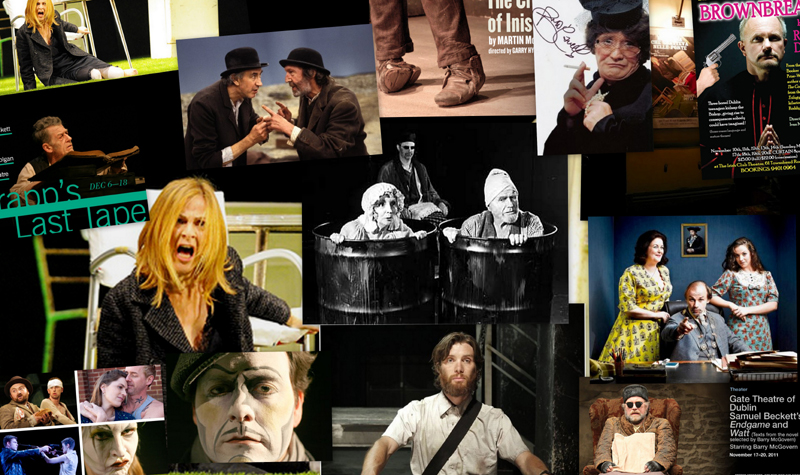 I recently reread Ulysses, prompted largely by Michael Foley’s book Embracing The Ordinary. Foley draws on the two outstanding writers Joyce and Proust in his exploration of the ordinariness of the human condition. Foley celebrates the writing of Joyce as the supreme example of making the ordinary extraordinary. In Ulysses, during a single day we see the antihero, Bloom, go about his business doing the ordinary things that people do. There is no plot, just as our own lives have no plot (although we are all capable of constructing the possible plot of our lives retrospectively).

With this theme in mind, Foley gives us a useful lens through which we can read or re-read Ulysses, one which cuts through the perception of Ulysses as inaccessible or academic.
Armed with the text of Ulysses still fresh in my ears, I attended the production of Dermot Bolger’s adaptation of the great novel.

One of the greatest and truest novels of all time.

Bolger understands Joyce and Joyce’s Dublin. He understands the geography and language. He has an ear for, and appreciation of, the cadences and arpeggios of Dublin voices, what Foley calls the opera of everyday speech. In this respect, there is no doubting Bolger’s pedigree as a writer who is well placed to interpret Joyce.
Nevertheless, the burning question for me is Why?
Why adapt Ulysses for theatre at all? Joyce wrote it as a novel and stretched the boundaries of that medium to breaking point. What purpose is served by transposing this work into the constrained world of theatre, with the temporal and physical limitations that a stage play invariably imposes. It is akin to adapting a symphony for a string quartet and compressing the movements into a single theme. It is impossible to compact Joyce’s 265,000 words into a two hour play.

This is not a criticism of Bolger: it is an acknowledgement that the stage adaptation of Ulysses is a different animal to the novel and must be judged independently. This must be the starting point in assessing this adaptation. It cannot be critically compared with Ulysses the novel but is better judged as a work in its own right. Only then can it be rightly examined as a work of theatre.

Bolger immediately breaks from the novel at the very start of the play. He begins at the end of the novel; one could argue that he actually begins on the blank page following Molly’s famous soliloquy. His idea of beginning at the end, with Bloom and Molly asleep in their bed is the perfect way to begin the play. It reminds us that this is not the novel. It gives Bloom the opportunity to relive his day much as any of us might look back on the days events and construct a meaningful narrative. It also sets the piece as one of reflection rather than one of plot.

For me, this is the essence of what makes Bolger’s adaptation so memorable. To me, Bolger is like an Impressionist painter, a Monet or Degas. He has not tried to blindly reproduce Joyce but instead chooses to present us with a play that contains the impression, the very essence, of Ulysses the novel.

The circular set design provides endless possibilities for a play that must transport us all around Dublin. It concentrates the action beautifully and provides a cauldron for the play as it moves at a fast pace through Blooms day. Bloom as a character is a revelation in this production. From the moment he leaves his marital bed and dons his hat and shoes, we can feel the ordinariness of the man and in this ordinariness we identify ourselves.

In the wrong hands Bloom could be farcical and unbelievable but we connect with this character as he journeys through his day. Jean-Paul Van Cauwelaert plays the role with huge sensitivity. We can feel his internal turmoil through his physical demeanour and facial expression. So much of Bloom’s internal dialogue goes unsaid but not unseen. The action proceeds at a pace and never let’s the audience relax. Even without a plot, there is a sense of movement as Bloom and Stephen interact with Dublin through the various characters they meet. These Dublin characters are instantly recognisable and have their modern-day counterparts in today’s city.
The players inhabit an array of different characters as they seamlessly shed one skin and don another.
It is difficult to single out any one in particular but, on the night, Mary Murray was outstanding.
Like Bolger, she understands Dublin. For anyone who has seen her perform in Sebastian Barry’s The Pride of Parnell Street the honesty of her performance in Ulysses will come as no surprise.
She moves from male to female characters without hesitation, avoiding the temptation to demonstrate virtuosity but instead concentrates on living the character.

So, what have Bolger and Tron Theatre achieved? For me, they have provided an impression of Ulysses and, just as one might look at water lilies differently having seen Monet’s creations, one might also return to read Ulysses and see it with new eyes.
For those who haven’t yet read Ulysses it might dispel some of the myth around the novel and encourage them to read and enjoy it.
Joyce once said:

See the play… and read the novel! Yes, yes, yes…

Liam O'Broin lives in Dublin where he divides his time between coaching, writing, music, photography and various other creative challenges that push him to the limits of his comfort zone. In addition to poetry he has dabbled in playwriting and has acted in productions of The Beauty Queen of Leenane, The Shadow of a Gunman, A Crucial Week in the Life of a Grocers Assistant, Give me your Answer Do, and War.
Previous Irish Books: what the Statue is made of
Next How The Irish Rediscovered the Solstice