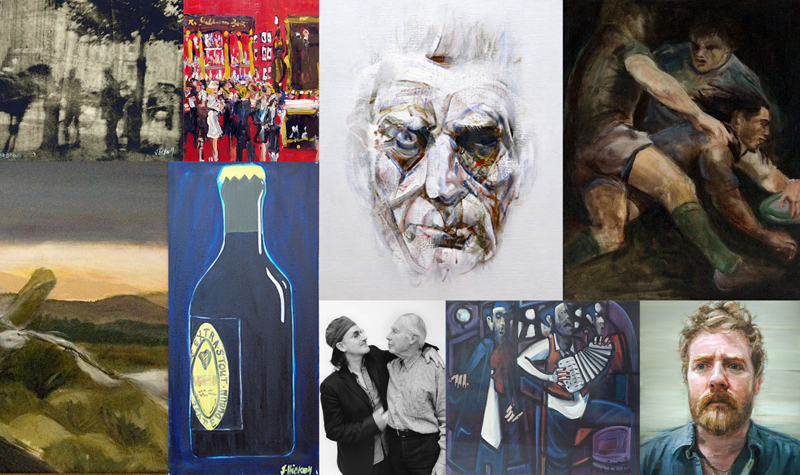 Tom Byrne: not the beauty but the truth

Today I had the opportunity to have a chat with Tom Byrne, one of the artists whose paintings are hosted by the Duke Street Gallery. Born in Dublin in 1962, he studied at Dun Laoghaire College of Art and Design and then trained in Berlin as a painter.

He paints a wide set of subjects: everyday things, Irish and Dublin landscapes in both abstract and realistic style (especially the Irish coastline and the Liffey bridges), portraits of Irish writers… He is highly captivated by what surrounds him:
What I want to do is to capture the truth more than beauty.
He also mentions David Hockney, Fernand Léger, Picasso and Auerbach as sources of inspiration for his work.

Italish: I would like to focus on your series of portraits of Irish writers, especially Samuel Beckett and James Joyce: why do you paint them? Is it a kind of homage?

T. B.:  Actually I started painting Beckett when I was working on abstracting the face: his face lends itself to abstraction as it is so craggy. Then I became more interested in him as a person. I started going to his plays and reading his poetry and books and eventually a Beckett scholar from a University in the United States presented me with a copy of his book on Beckett: this led me to be deeply involved in his works, and to appreciate him as one of the most innovative and original writers of his age.
This interest in Irish writers inevitably led me to James Joyce. I was commissioned by the director of the most recent Ulysses film to paint a portrait of Joyce, and this led to a series of portraits of him, on both a small and large scale, that have recently been included in a film documentary.

I love his books, especially Ulysses, for the psychoanalytical implications they have: this is what fascinates me the most about Joyce, the way he conveys mental disorders and obsessions through his use of language. I also like to find out more about him about him as a person, all while painting studies of him.
Besides, I feel a sort of personal connection with these two writers: both Beckett and Joyce probably suffered from Asperger’s Syndrome, which led them to obsessive behaviours and made difficult for them to have normal relationships, to communicate properly with other people, and to understand and accept society and its rules. I had the same problems when I used to be affected by alcoholism.

Italish: In your paintings you explore both the realistic and abstract style, but these portraits are mostly painted in a veristic way, as you can count all the wrinkles and small details of their faces. Is there a particular reason?

T.B.: No, there isn’t a particular reason, I just tend to start painting a subject in a realistic way. I’m a painter first and foremost, and keeping the same subjects gives me the chance of developing a technique, of getting better and better with it. This is why I use to paint the same subjects, often with the same style. But I always start being realistic, because I think it is the basis for painting: you won’t be able to paint abstract works if you can’t use the realistic style. I love both of these styles, and I often try to start from realistic works and to bring them to abstraction little by little.

Massimiliano "Q-ROB" Roveri writes on and about Internet since 1997. A philosopher lent to the IT world blogs, shares (and teaches how to blog and share) between Ireland and Italy.
@MassiMaxRov
Previous Martin McDonagh, empathy for children and Beckett’s misopedia
Next Nip some doom in the tea: an Irish tea post