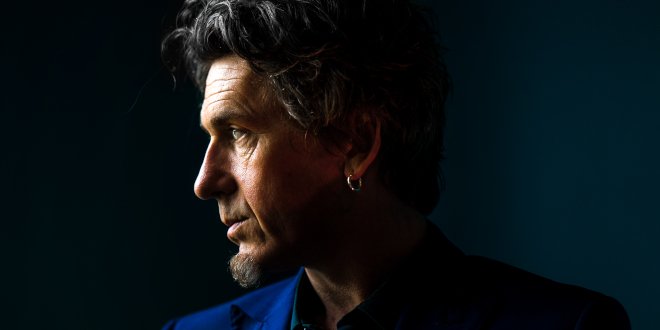 Peter Murphy is a writer and spoken-word performer from Wexford, Ireland.

He is the author of two novels, John the Revelator (2009) and Shall We Gather at the River (2013), published by Faber & Faber in Ireland and the UK, and by Houghton Mifflin Harcourt in the US and Canada.

John the Revelator was translated into Italian and published as John il Visionario by Fazi Editore in 2011.

Peter’s journalism and non-fiction has appeared in Rolling Stone, The Guardian, the Irish Times, Hot Press and Huffington Post.

He is a regular guest on RTE Radio 1’s arts review show Arena.

He currently performs live under the name Cursed Murphy, and his first single ‘Foxhole Prayer’ was released last September (selected by Hot Press as their featured track of the day), and is currently recording his debut album with his live ensemble the Resistance, plus long-time collaborators Dan Comerford, Johnny Fox and Basciville.

A second single, ‘The Bells of Hell’ is due for October 2019. Peter has previously released two spoken word/music albums with the Revelator Orchestra, The Sounds of John the Revelator and The Brotherhood of the Flood, and has performed in Rome, Berlin, Boston, New York, London and Tranas, Sweden.

Peter recently served as writer-in-residence at Carlow College, as well as curating Cursed Murphy’s Laboratory, a hugely successful series of interdisciplinary arts events. He is currently completing his third book.

2019 Recipient of Artlinks bursary to record solo album, Cursed Murphy Versus the Resistance, due for release in 2020.

2009 Shortlisted for the Kerry Group Fiction Prize. Longlisted for The Guardian’s Not the Booker Prize.

“Everything about John the Revelator excited me – I couldn’t wait to turn the page and keep on going. It was like reading for the first time, almost as if I’d never read a novel before.”

“… A dark and deeply talented novelist. This second novel of his is a wild and inventive butt-kicker, but it’s also strangely tender, and its language is charged, vivid, luminous.”

“In the hallowed pantheon of Irish coming-of-age novels, Murphy’s strongly written debut splits the difference between the sensitivity of Portrait of an Artist and the freakishness of Butcher Boy. With this novel, he doesn’t have to bow to any of them.”

“Fabulous… It’s some of the best writing I’ve seen from a younger Irish writer in a while.”

“A passionate dream of a book. Dazzling, but lucid – as though Flannery O’Connor had gone back to the Ireland of her forebears to write this novel.”

Massimiliano "Q-ROB" Roveri writes on and about Internet since 1997. A philosopher lent to the IT world blogs, shares (and teaches how to blog and share) between Ireland and Italy.
@MassiMaxRov
Previous Sapore di Casa / Taste of Home: survey and talk, SPLF 2020
Next Basciville Guests of Honour SPLF 2020