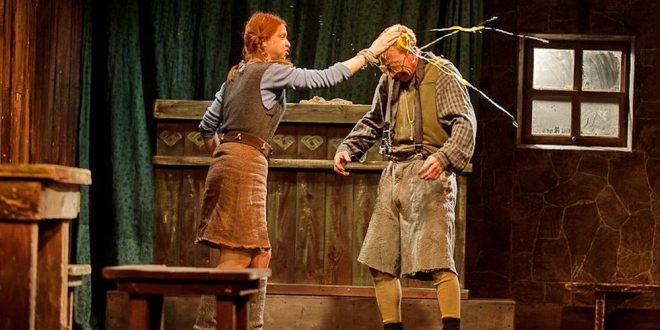 Irish MacDonagh is remarkably well received in Russia. Although, probably, it is close and clear in general to all people of the world who are able to sympathize, understand, forgive, be tolerant. Russian people in general, which, I would say, are very similar to the Irish, strange as it sounds.

There is no feeling that McDonagh is talking about some other alien strangers, on the contrary, the distance between us does not seem to exist, as if I already know all his characters, we have met somewhere, talked about something.

In Moscow, McDonagh’s plays are in great demand in theaters, I know that many specifically “go to McDonch” for his performances. This is not surprising, because their external form is deceptive, the drama eventually turns into pure water, the right sentimentality without the sweetness, but with the taste of something very very good and light.

The play “A Cripple from Inishman” by the Perm Theater “At the Bridge” (Russia) is the one about which you do not want to write anything but a brief one: “To watch”.

Because it is beautiful.

And such a gentle little perceptible comedy in some phrase, in some note, gesture.

There was no character on the stage with whom I would not fall in love.

Ask me what the play is about – I will answer: about kindness, love, loneliness, nobility, strength of mind, strong characters.

Ask, and who are the characters? I will answer: strange aunts, a cripple, a bad girl and her brother a moron, a pugnacious fisherman, a gossiping peasant and an alcoholic mother.

How can this be combined? The combination of the incompatible – rude humor, the monotony of repeated phrases, shrill moments, aching tenderness, laughter and tears at the same time? If this is typical for Ireland, then I like Ireland! And I like Perm!

MacDonagh is a sincere Tarantino, Sergey Fedotov from Perm is a subtle, talented director, and the “By the Bridge” theater is the discoverer of this already widely-known Irish playwright and initiator of the world’s first Martin MacDonagh Festival, as well as the world’s only theater on stage that all of his 8 pieces. “The Cripple of Inishmaan”, as you understood, is one of them.

This performance received the Golden Mask in 2010. I do not know how these awards are distributed, but I would give everyone a mask in this performance.

MacDonagh & Fedotov do not disclose the characters of the heroes immediately and completely, but on the contrary, gradually, without hurrying anywhere, they gradually add the bar after the bar. It seems to work in an impressionistic manner, adding light to the portraits of the heroes and to the hearts of the audience. Only MacDonagh can recite incomprehensible characters, strange, defective, ugly and even moronic, and then make their inner essence completely overshadows the appearance, absurd behavior, and in general, all unclean tinsel becomes absolutely unimportant. All these marginals will suddenly bloom in front of you as the most beautiful roses. The great humanist MacDonagh sees the spark of God in everyone.

About such performances you warm yourself with a soul like a warm hearth. The performance, despite the ridiculous circumstances, is very beautiful, subtlely beautiful. Beauty in everyday simplicity. In that it seems to all of us unimportant, to which we do not pay attention.

I have never seen the performances of this theater before, but as I understand it, Sergey Fedotov is always scrupulous in trifles and likes to recreate in detail on the stage the spaces in which the heroes live. In our case, this is the house and the store where Billy and his aunts live. Fedotov fills it, he settles in, as his own dwelling, thinking through it in detail and filling it with a variety of but important things, from paintings to a can of peas.

Scenography is great. The color of light, sound background, changing the place of action. The setting is completely naturalistic. Each scene is illuminated in its own way, which makes it possible to assume what time of day, what the weather is outside the walls of the house. A window as a connection with the outside world (constantly looking out), playing with light: sepia (evening), mint green (sea), bright yellow (morning). The imagination of man is a very powerful toolkit. If you hook it, then it will rush further like a free wind and draw a small town, the sea, its inhabitants.

Sometimes there is such a zone of alienation created on the stage, which you can observe interestingly, but remotely, without being drawn inwards or deeper. And here – you are there!

Actor’s work – virtuoso. What else can you choose the word – delicate, jewelery, perfect.

Actors masterfully pumped up the atmosphere. And a lump rises to her throat when Aunt Eileen pulls off the tip of her handkerchief, asks if the potato pancakes with tea should be brought to dinner … when the story of Johnnypatinmayk comes to light … when Helen comes along with Billy …

I did not scream “bravo!” Because I was internally weak from empathy. It took me a while to enter the play, and it also took it to get out of it. I thank every actor …

She experienced cathartic relief when the heroes finally unbent themselves on bows, finally got out of their wheelchairs and so on and turned into actors, that is, people. Phew, cripple Billy – Vasily Skidanov – alive and well!

I would go to the performances of this theater every day as a job and I would review the whole repertoire.

Massimiliano "Q-ROB" Roveri writes on and about Internet since 1997. A philosopher lent to the IT world blogs, shares (and teaches how to blog and share) between Ireland and Italy.
@MassiMaxRov
Previous Irish musicians: he prefers the harp to the violin
Next Eric Godon: back to/in Bruges – an interview