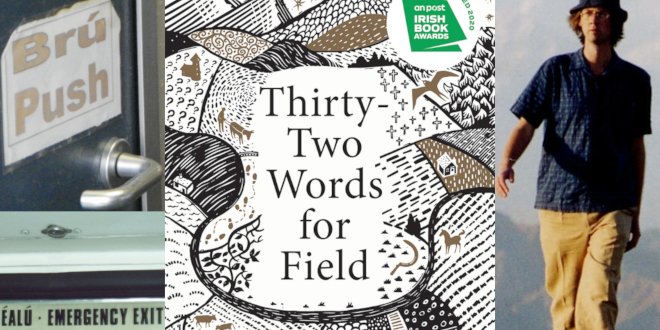 Manchán Magan is a very interesting voice of the Irish cultural landscape, and a Gaeilge voice indeed. “Thirty-Two Words for Field – Lost Words of the Irish Landscape” Landscape is his most recent work: we interviewed him about the book and a lot more of Gaeilge things!

IM – As you know already, I decided to contact you after me reading “Thirty-Two Words for Field – Lost Words of the Irish Landscape” and some of your columns in The Irish Times I found absolutely fascinating.

What I really loved about “Thirty-Two Words for Field – Lost Words of the Irish Landscape” is the fact, while starting from a perspective that can seem all about identity, as language is a huge lot about identity! – the book gives to the reader tools for reimagining her/his vision of the world, using what actually makes Gaeilge so special, unique. With my questions, I am trying to give the ItalishMagazine’s audience a glimpse into the book and that uniqueness.

Do you want to tell us something about this? From a more practical point of view: why should a non – Irish read the book?

MM – The current inhabitants of Ireland are not the indigenous people of this land.

We do not share DNA with the people who built the great ceremonial passage tombs and gatherings places five thousand years ago, but we are descendants of the first Bronze Age settlers who arrived in Ireland about 4,000 years ago, and we started speaking an early version of this Gaelic language that we will speak today at least two thousand years ago, and possibly far earlier.

It means that we are a very ancient people who have been living in the same area, with the same language and culture for millennia. This gives us a powerful insight that is relevant to all Europeans.

We are a people who are deeply connected with the land and the coast, and with the complex spiritual and psychological interactions that arise among a community who have lived in the same place for eons of time.

The book reveals how Irish (or the Gaelic language) seems to contain insights that stretch right back to the first inhabitants to arrived on the island of Ireland 10,000 years ago when the ice sheet retreated after the last Ice Age.

In some ways, this is relevant mostly to Ireland alone, but in fact, 10,000 years ago we were all connected. The history of one people if you can trace it back far enough becomes the history of all people.

IM – I find absolutely fascinating the connection between grammar and vision of the world: in your book Gaeilge seems a language which is incapable of imperialism; and a language which has its own “magic”: correct me if I am wrong, Irish as a specific tense for an endless present; Scim is a such powerful concept, which brings together magic and science: from Gaiman’s Sandman and Douglas Adams’s Dirk Gently to sub-atomic particles and black holes… Where that magic comes from? And what is the connection between that magic and the “ecocriticismness” of Gaeilge?

MM – The Irish mind, like so many early cultures, was not particularly wedded to the rational and to the lits of physical reality.

Our songs, stories, dances and lore make it clear that we believed always in multiple realities.

The Otherworld, or alternate dimensions, were always only a thin veil away from the physical world. This facilitates a completely different way of seeing the world. It’s almost psychedelic, as one can drop into dream realms and fantasies at any point. One is never sure what is reality and what is imagination. This easy acceptance of multiple realities is akin to the modern understanding of quantum physics.

The language is built upon an awareness of these magical elements, but also a profound awareness of the specificity of nature. The language goes into incredible depth about elements of nature and the natural world, such that it imagines that nothing good can happen unless nature is treated with respect and harmony. So many of the old stories contain this message.

Much of this arises from the nature-based, animistic belief system that thrived in Ireland until the arrival of Christianity in the 5th Century. Many elements of the nature-worship continued alongside Christianity right up into the 20th century, and you can still find it today in the practises and beliefs of Irish Catholicism which has one foot in the Vatican in the Rome and another in pagan nature worship.

IM – I remember Liam Ó Maonlaí telling us in an interview that for learning Gaeilge you should just listen, for a couple of years, and then you could start trying to go further: is Gaeilge so difficult?

Would you have any suggestions for people who would want to learn Gaeilge?

MM – Gaeilge is not difficult as is demonstrated by the many people from all around the world who now have learnt it in recent decades. It is especially clear how easy it is to learn when you speak to the new migrants who have arrived from all over Africa and Eastern Europe. Children of these people learn Irish without any difficulty in school.

The only people for whom Irish is difficult are the Irish themselves.

We seem to have a psychological block when it comes to the language. We associate it in our minds with the poverty, despair and deprivation that we endured for centuries, especially during the time of the Great Famine in the 1840s when a quarter of the population died.

At the time we were told that Irish was the language of poverty, starvation and backwardness and that it was vital we learn English to be able to survive in North America and Britain. That trauma is still lodged deep within us, and it seems to cause us to reject the language at a deep, visceral level.

IM – And, ultimately, why should people learn Gaeilge?

MM – People should learn Irish as it is a truly ancient language – the oldest continuously spoken, vernacular language in Europe. It holds insights into the landscape, lore and psyche of pre-historic cultures in Europe.

It has encoded within it a profound way of seeing reality and other dimensions, and of appreciating nature, and the energy that resides within nature. As a language, it is potent and transformative. It is about as far as you can get from the rational, limited, contrived and artificial lives that so many of us are living now.

IM – As you know, I am very proud of my cúpla focal, and I am fascinated by stories such the ones of Ola Majekodunmi or Fang Zhang; I find intriguing, even if, of course, in a completely different way, the love / hate relation between Gaeilge and Irish people.

While I remember, with a smile and a lot of respect, the young kid on Inis Mór who scolded me because I used “hi” and not “Slán” to say “Goodbye”, the vast majority of people just don’t “do” Irish, sometimes they also seem quite proud of that, as if Gaeilge is just something from the past (a past that has to stay in the past indeed).

What are your thoughts on this?

Like many colonised people, rather than facing up to and healing our wounds we tend to hide from them and blank them out with alcohol and games of denial.

… By the way: you know that “Slán” is the Irish for “Goodbye”. It is short for “Slán leat”, which means “Health be with you”. It is only used when you are saying farewell.

IM – We are living in these strange, and scary, times: what are the words of the pandemic in Irish?

MM – I’ve no great answer for you here., except here is something I wrote recently for RTE:

The Irish word Mothaím means I feel, or I touch.
It also means I feel the loss of, or I miss.

I haven’t touched the autumn-leaf-like skin of my great friend, 93-year-old Ultan Heron, in six months now, nor my mother’s still soft skin, aged 81, nor my nieces or nephews, or brothers or sister.

Tadhall – the act of touching; the sense of touch.
An bheatha tadhaill, means life on earth; with beatha being life.

So the phrase actually defines life on earth, as the life of touch, the life of physical contact.

What has been taken from us these last months is pretty elemental. And, what happens when we don’t have touch? Well, it can’t really be an bheatha tadhaill anymore.

IM – In a broader and brighter way: what are, let’s say five words that actually “make”, define, the very essence of Gaeilge?

Or, if you want: what are your Irish favourite words (my top of the top one being stagún…)

MM – let me give you a selection:

Words for Fun and Reverly

IM – The last question: we are having this conversation in a language that is a “third party” for the both of us. So: let’s talk about English, now.

English is a language very different from Irish (following your lead, closer to Italian, in a way) and a language that Irish authors ended up mastering… well: quite well.

I remember John Banville saying in an interview that some of the greatness of Irish writers actually comes from reshaping English with an Irish mindset: what do you think of this?

Is Irish a sort of virus that made English better, thanks to Flann O’Brien, Joyce, Beckett, more recently Martin McDonagh too, with his Hiberno-English?

What are some less known writers who actually wrote in Irish, or were influenced by Gaeilge, that you would suggest? And a few books about Gaeilge?

The druid, bard and file were key figures in Irish society for many thousands of years.

There has always been a lineage of people who could summon of emotions, insights and even realities through words.

Talking, singing and expressing ideas in words have always been our forte, whereas visually we have been rather limited and almost stunted.

We have given virtually no great visual art to the world, and still today our ability to really appreciate shape, image, colour and texture is not as attuned as it is in other cultures.

As regards, writers writing in Irish or influenced by Irish who I believe are worth reading, I’d say Nuala Ní Dhomhnaill – both her poetry and prose are worth tracking down in translation.

Other posts you could find interesting