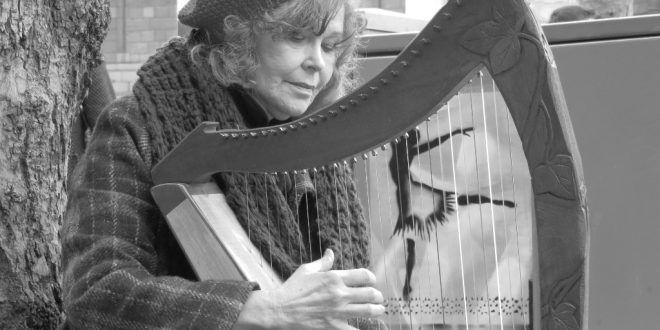 Irish musicians: he prefers the harp to the violin

Irish musicians: he prefers the harp to the violin

Between the two, he prefers the harp. The violin was loved and lots of people stopped to listen to it. When he played it, he became an old man with short and thick white hair; even the beard was white. He used to wear an old dark brown hat, woollen finglerless gloves, a simple jumper, trousers, old black shoes that a long time ago were elegant but now are worn and without a part of the unlined right sole, a long black coat. He always changed only the sweaters.

With his old light blue eyes he looked at the people for a few seconds; who stopped, who went straight on, he looked at all of them. He always sent the same message to them, it didn’t matter what age, what gender, what religion, the what social class; the message was always the same: go where the wind brings you, in full sail, respecting others, but go. Break your cage when your owner is out, go out through the window and fly! Damn!

Only one time a girl had told him that the sound of his violin was like the wind’s voice. Dead, humanity almost without hope.

Anyway, he preferred the harp. In the streets and around Ireland, when he played it, he looked like a woman. He was always the same woman with the dreaming eyes that looked elsewhere, to another world. Her hair length and age changed: twenty years old with long hair, forty or sixty years old with a bob; it was always her and no one ever noticed. Everything changed when she played the harp because when she played it, she did it to awaken old stories. The harp had the power to lull the people to sleep, to make them laugh or cry. It was the Dagda’s harp. He gave it to him before he decided to try and become fully human, before he decided to be reborn, before getting lost like many, into the oblivion of reincarnation.

“To be sure” he told him “you are wiser than me. You never had second thoughts or doubts about your nature. With you, she will stay alive; with me, she could vanishing and become a simple musical instrument without her own soul, only that of her owner.”

He had accepted and promised that the harp would continue to live. He keeps his promise. Every time she (because with the harp he was a she) plays it, she leaves it free to tell stories about battles, party, love, abandonment, magic; especially magic.

If the violin was the wind’s voice, the harp was the vivid memory of time and it was for a few peole. She insisted, she continued and did not give up; every time the soul’s harp told stories that almost extinct ancestral memory that in a dark corner of the soul of people, asks to be recognized and nourished. She saw it happen.

Something slowly started to vibrate after a long time and images and stories resurfaced: dusty and blurry, they fought for their being. She saw the people’s eyes see the world in half, one part in the present and the other one who knows where. She saw the people’s eyes try, in vain, to be at the same moment in time. She saw what they saw. People live mostly in the past, the present is almost never considered and the future is something uncertain that revolves around some common fixed point: work, family, house, maybe some adventure or some trip; but everything ends there. It was easier to awaken the past than to fly them into the future.

The fact is that in spite of everything, he prefers the harp to the violin, that particular harp; the Dagda’s harp, now his harp with a secret name never to be spoken and with its own soul.

To all the musicians of Ireland