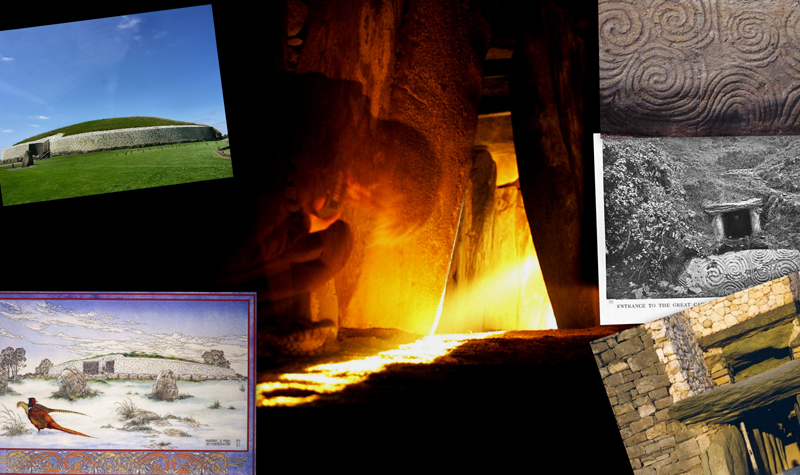 How The Irish Rediscovered the Solstice

< Gráinne? >
Enda uí Rómhar had been waken up by something. Of course he thought it was his wife.
It happens to everybody that, barely awake, things in your head are a little bit fuzzy.
Sleep is a mysterious thing and awakening even more, perhaps.
But a few moments later Enda realized why it couldn’t have been her wife: she was dead. She had died the day before.

It happens. Endlessly. And in winter it’s even worse. But she had died incomprehensibly: not a wound, not an illness. Simply she didn’t wake up back.
Gráinne’s body was now close to their home, under the snow.
He hadn’t had the nerve to cremate her. Not yet. Someone said it was better to bury corpses, someone to cremate them. But the ground was frozen, and the snow preserves. It was just an excuse to do nothing, to make her not disappear: the snow preserves… For a while.
A reflection had awakened Enda. A sunbeam had struck right in his eyes, passing one of the too many holes of the house’s wall. Enda jumped up, he believed to have seen… What?
Maybe she was still there, in a way, for a while?

Liath, their cat, and Fionn, their dog, had yelped when he had jumped up, popping out of the couch’s fur.
Who knows what animals understand of death. Anyway: what do we understand about her?
It had been the iron knife. Iron: so much cooler than bronze! The sun that had violated the house had struck the knife and had arrived from there to his eyes. Enda had opened his eyes and he had believed to see Gráinne. Or something of her, at least.
Enda rekindled the fire. He made a mark with the ashes in the same spot where the knife was. An idea was shaping in his mind. If his wife was still there in the mornings, he would find a way to discover it.

Then he went hunting.
The next morning. The knife was in the same place, exactly like the day before. Gráinne was still under the snow. Nothing had happened.
He continued to put the knife in the same spot, day after day. But nothing ever happened.
And in Éire it rains so often: on many many mornings there were no raise of sun at all.
Enda cremated his wife. He entrusted the ashes to Boann: Boann took the ashes to the sea, to east, to the sun.
Again, the sun…

Again came the winter. By that time dawn had become for Enda a rite and an obsession. And that obsession was his wife.
Enda had started to mark with ashes, whenever it was possible, the sun’s reflection: there was a pattern, a meaning in that movement. The reflection was coming back. So, was his wife coming back too? Would she come back?

Perhaps if I had buried her…

It had to be the right morning. It was raining. Enda cried.
The reflection started to recede again and, very slowly, season after season, it started again to get closer to the point.
So, on the same day of the following year, on a blazing morning, the sun shot Enda’s eye exactly like two years before.
But nothing happened.

The first thing he thought was to kill Liath and Fionn and burn himself with them and the home.
He had been just stupid for two years. It had no sense trying to give a meaning to such a black thing like death.
He was just stupid.
Or not. The sun. There must be a meaning.

Maybe he just had to think of it differently: the problem wasn’t where the sun comes from, but where it goes.
And, since he hadn’t been strong enough, or coward enough, to commit suicide, he would have followed the sun. He took all the food he had and he left.
Probably he would die anyway, but it wouldn’t be a coward death. It would have been the death of a hero, looking for the dusk halls of the sun. And there, he was sure, he would have found his wife, he could have her back.
And so he left, following the sun. It wasn’t yet the mid of the day when the quest encountered troubles:
Fionn chased a rabbit, and Liath chased Fionn. After a while Fionn came back barking desperately

Don’t take away Liath from me too…

Enda told, ignoring who he was speaking to.
Fionn crawled a low hill. He was desperately barking on a spot of the ground. Enda, running as fast as he could, started to hear meows: Liath was trapped, probably in the rabbit’s nest.
Because cats are wild things, and they look only forward…

Liath had been lucky, the hole wasn’t so deep. And Enda realized that there were crafted stones in it: they were white and polished stones, there where spirals and swirls on them: the kind of patterns remaining in your eye after you have watched the sun.
And the direction! It was the right direction, on the sun’s path!

Iron: it’s so cool… and the winter’s ground was easy to crumble. Fionn and Liath were digging too and Enda was smiling while digging. They dug for days and days. The animals liked that new game so much.
There was a cave under the hill. There was a three chambered hall exactly in the direction opposite to the rising sun, and a rift exactly – Enda was sure of it – in the direction of where the sun rose on that cursed day. Enda was sure that, on the exact day, the sun would have entered the chambers.

For the next four years, on the right morning, it rained. Liath and Fionn were very old as animals, but they were still alive.

The fifth year Enda was in the core of the hill when the sun rose.
Nothing happened.
But, in the sun, Enda saw Gráinne’s face and, while he was smiling, he cried.

Than you to Monica for the editing!