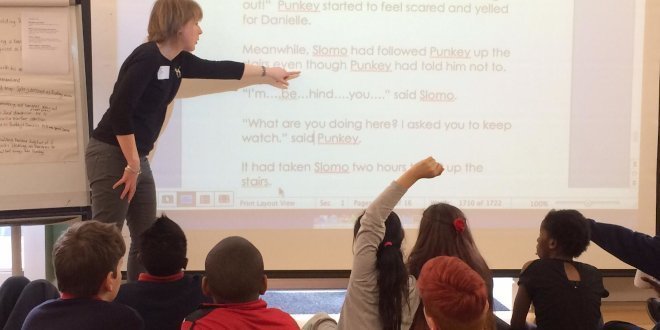 IM: Ciao Sara, as we are getting closer to the FW 10th anniversary, would you want to tell us something about what FW is, what it was “in the beginning”, and about how the project have been growing in this ten years?
You are originally from the States: how did you get involved?

SB: I came to Dublin in 1996 to study medieval history at Trinity College Dublin.

IM: On a lighter side, they say the two sides of the Atlantic are “divided by the same language”: did you have any funny episode in your first times here, involving languages or, more generally speaking, about the difference between the two cultures?

SB: Even now, students are fascinated by my accent – and not just mine, any of the volunteers who have a North American accent. They’ve seen all the movies, video games and TV shows so they tend to think I am from this really glamourous place because I went to high school, not secondary school.
I always tell them that the place where I am from (Connecticut) is actually quite boring (relatively speaking of course!) but they don’t believe me.
We did have an incident a few years ago with one of our interns from the US.
In Ireland, people pronounce the letter R as “oar” when spelling out a word.
In the US, people pronounce it like “are.” A group of secondary school students chose the name starting with R as a character in the story and the intern spelled it OAR-o-n-a-n instead of just Ronan. That got a lot of laughs…

IM: A different angle: FW Ireland is not the only one, and the project, you were saying just a few days ago, has in its DNA the genes of being open towards other Countries and environments.
Can you tell us something about this, about the other FW branches and the projects that FW Ireland have been developing also in extremely difficult contexts, such as direct provision sites in Ireland and refugees camps?

SB: Fighting Words is now in ten different locations on the island of Ireland, with three more locations due to open before the end of 2019.
We are also part of The International Alliance of Youth Writing Centers, which is a network of writing centers across the world running creative writing workshops to children and young people.
The ethos of all the centers is to offer free workshops coordinated by volunteer tutor/mentors in which the participants determine the content.
In the context of this ethos, participants are free to express themselves in a safe and creative environment.
We have been able to extend our work to groups in direct provision in Ireland and in camps in Jordan, for example, because the workshops allow for people to write about what is important to them, at their own pace, in their own language, without worrying about grammar, spelling or structure.
It is a very inclusive way of working that creates a safe space for people to develop their own voices.

IM: I personally heard Roddy saying “you always leave a FW workshop better than how you feel when you get in”: do you want to add anything about this?

SB: I think it’s a great way to sum up why volunteering with Fighting Words is such a rewarding experience!

IM: I am a not – English mother tongue volunteer and I do agree with what Roddy said. Moreover, I think that the workshops are a great way to interact with Irish people in the best possible way: would you want to say something to our audience, and why other, for example, Italians, should become FW volunteers?

SB: Italian people should volunteer with Fighting Words (or at our Italian sister organisation La Grande Fabbrica delle Parole) because it is flexible, it offers a way to help children and young people build their confidence in a creative environment and most of all, it is fun.

IM: … and then FW will turn 20… What is your vision for the future of FW? How do you see FW developing in the next few years? Are there any plans to develop workshops with adults (I am biased, I know…) who don’t have English as a first language, for example?

SB: I see Fighting Words developing in more locations all over Ireland – we would like every young person to have easy access to our programs.
This is already happening and it is very exciting. We would also like to expand and develop our partnership with Dublin City University and bring the Fighting Words model into the classroom.
We have already started with programs for adults for whom English is not their first language.
We ran workshops recently for students at a local English language college and they were just fantastic. Because we don’t emphasise “proper” grammar, people felt free to use their English and we wrote some great stories.
There may be more in the future!

Massimiliano "Q-ROB" Roveri writes on and about Internet since 1997. A philosopher lent to the IT world blogs, shares (and teaches how to blog and share) between Ireland and Italy.
@MassiMaxRov
Previous Driving Around Ireland: Most Scenic Routes to Take
Next Sapore di Casa / Taste of Home: survey and talk, SPLF 2020