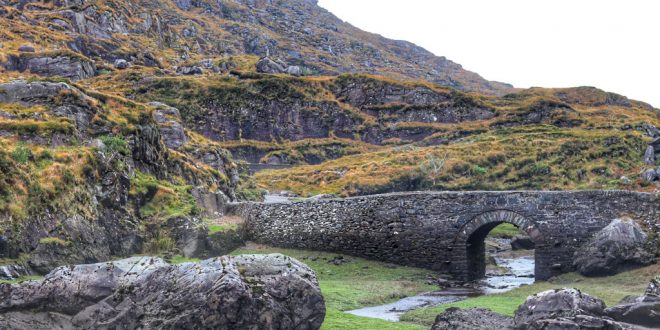 Driving Around Ireland: Most Scenic Routes to Take

Driving Around Ireland: Most Scenic Routes to Take on the Emerald Isle

Nearly every person has the desire to go on an adventure and set off on at least one epic road trip in their life; be it driving with a loved one or just a solo self-discovering opportunity, what better place to travel than Ireland?

Some of the best routes that will take you through the hidden gems of in this island:

The island is small enough to cross it from top to bottom in just seven hours!

Yet it is speckled with roadways winding between sloping hills, towering mountains, serene lakes, and magnificent seaside cliffs.

With scenery like that, road trips in Ireland are bound to be a delight. Here are some of the best routes that will take you through the hidden gems of in this island.

One of the most famous routes in Ireland starts from its heart, the capital.

Leave Dublin and go South towards the village of Enniskerry down the R117 motorway. Soak in your surroundings as the country shows you its greener side and the Sugar Loaf Mountain appears on the horizon.

Take a stop at Powerscourt where you will find Ireland’s highest waterfall.

Driving onwards down the R115, which climbs towards Sally Gap, you’ll encounter some of the most breathtaking sights the road has to offer. It’s one of the two passes that run panoramically: from East to West.

Be warned, the road may be beautiful but it can be a little scary for those concerned about road safety as it is quite narrow in some spots!

One of the best stops in the Wicklow Mountains is the glacial valley of Glendalough – the valley of two lakes surrounded by vast scree-covered slopes.

Once a monastic settlement, it is studded with centuries old remnants from the medieval times.

The entire drive measures between 50 to 60 kilometres.

If you’re looking to return to Dublin, follow the R763 to the quaint village of Roundstone, and back to the city via the M11.

The Ring of Kerry

The Ring of Kerry is just as adventurous as it sounds. It starts at Killarney, taking you around a series of breathtaking sights of the Iveragh Peninsula for four to five hours before returning back to the same town of Killarney.

The entire trip is about 179 kilometres.

The looping route is fairly simple to follow, but I can’t guarantee that you won’t be straying. That’s because the route is studded with place after place that is a must-visit.

The ring starts with the breathtaking Killarney National Park. Eight minutes further and you can see the gushing Torc waterfall where a steep climb will offer you a great view of the area.

On your way you’ll be greeted by Ireland’s tallest mountain range – the MacGillycuddy’s Reek.

A little further, you will find the valley of Moll’s Gap. And if you’re looking for a quick stop to rest your legs, village of Kenmare will be perfect for that.

It is filled with activities for people of all ages, with inhabitants that are more welcoming than you can imagine.

Another major attraction for many – especially Star Wars’ fans – are the Skellig Islands which many will recognise as the place where ‘The Last Jedi’ was filmed.

Throughout your journey you’ll witness serene coastlines such as that of the Rossbeigh beach.

End your ride by visiting the majestic Ross Castle, ten minutes away from Killarney.

Explore the gorgeous scenery in County Sligo, which inspired WB Yeats to become the world renowned poet he did.

Yes, Yeats spent much of his youth in County Sligo. This looping route starts and ends in the middle of Sligo and stretches 185 kilometres.

You can start your trip by visiting the hauntingly beautiful Sligo Abbey – a centuries old marvel with gothic and renaissance artefacts.

Keep going West towards the Knocknarea Mountain, and hike up to the Queen Maeve’s Cairn for a breathtaking view.

Further on you will see the Glencar Waterfalls – a treat for the admirers of Yeats. He rests ‘Under the Ben Bulben’ mountain range nearby and if you want, you can take a five minute break to pay your respects at Drumcliff.

The stunning shoreline of Lough Gill will be sure to bring you back on this route soon.

The journey barely takes two hours, yet it is filled with gorgeous sites that will make you feel just as poetic as the late WB Yeats.

Buckle up and start preparing for a long drive if you’re thinking about this route.

Many people underestimate the length of the Wild Atlantic Way because Ireland is a small country. But the roughly 2500 kilometres of road is the world’s’ longest signed coastal drive will take you across many different counties.

The journey starts with Malin Head in County Donegal and ends on the opposite end of the country with Kinsale in County Cork.

It goes through the counties Leitrim, Sligo, Mayo, Galway, Clare, Limerick and Kerry while still sticking to the coastal lines.

Needless to say, this route offers you a fantastic view of the Atlantic, and allows you to fully experience the essence of the country from head to toe.

On this route you will see the Northern headlands where Northern lights dance above the towering Slieve League cliffs carved by the ocean, where you can also surf away at the Mullaghmore Head in warmer months.

As you near Kinsale, you will pass through the Bantry Bay where you will see coastal forts, ancient remnants, lush greenery and beautiful lakes.

When you finally reach the end of your journey in the seaside town, look out for the Old Head Lighthouse standing tall on the Old Head of Kinsale cliff which juts out into the Atlantic; the perfect ending to a perfect journey.

The word ‘Burren’ is Irish for rocky area, and what an accurate name that is! The vast limestone landscape is like nothing you have seen before.

The entire loop is about 68 kilometres long and starts at the Southern end of the Clare County at Kilfenora. There, you can drive to nature’s best music: the sound of the Atlantic Ocean.

You can start your route from the village of Kilfenora and go through Lisdoonvarna northwards on the R477 which will take you to Black Head along the sparkling coastline.

Also make sure to keep an eye out for the Newtown castle near Ballyvaughan.

Afterwards, head down the N67 to Carran, where a plethora of heritage sites such as the Carran Medieval Church, and the Gleninsheen Wedge Tomb await you.

Keep driving and you will be back at Kilfenora in no time.

The entire road trip takes around a couple of hours without stops, so it’s perfect for a day out.

No matter what route you choose to take, I guarantee that you’ll be coming back for more; road trips are a great way to rid yourself of all worries and just take in the view for once!

Giles Kirkland is a dedicated automotive expert with a passion for travelling and sustainable development. He enjoys sharing his travel advice with other drivers and mindful living enthusiasts. You can find his articles at Oponeo, other blogs and Twitter.
Previous A Chinese in Ireland: Italish interviews Fang Zhang
Next Fighting Words Ireland: Italish interviews Sara Bennett

Peter Murphy, the author of "John the Revelator", is the first Guest of Honour of SPLF 2020