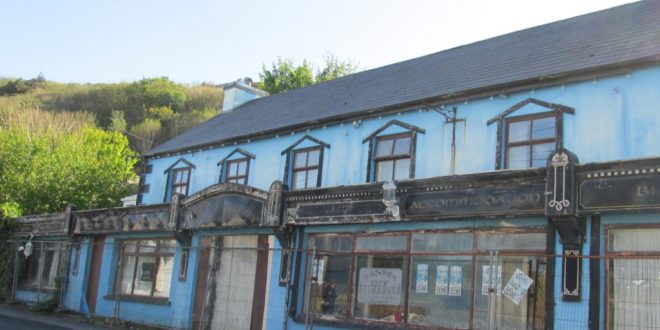 It was a blue decaying building. Its guest rooms, its restaurant and its pub were dusty and long since abandoned. Outside its signs appeared faded and an enclosure prevented you from entering.

“Could I have an Hop House, please?”
“We don’t have it.”
“Then a Smithwicks.” The bartender pulled the pint and put it on the counter.
“Thanks.”

“Where have you been in this rainy, windy, cold, sunny and warm day?” A smile appeared on the face of the young man seated at the counter.

“In lots of places” he said “but some but some I liked more than others.”

Like Horn Head. That part of the day the sun was shining, the clouds ran around it and the sea had the same light blue as the sky. The sky was so clear that I could see Tory Island.”

“Tory Island.”
“Yes, the ancestor island which host that f…..g Fomorian.”
“Thank God there was Lúg.”
“Yes, Lúg, who hit Balor in his one eye and killed him… his grandfather… can you imagine?”
“No.”

“Anyway, speaking about tales, I saw the Doe Castle. Did you know, Each castle has its own tragedy and this has its own as well. The story says that Aileen Mac Sweeney, the owner’s daughter, fell in love with Turlough O’Boyle, the son of her father’s bitter enemy. A kind of Irish Romeo and Juliet. When her father found out, he kidnapped the poor guy and he tortured him until he died. From the pain, she killed herself by throwing herself out the castle window.”

“Eh but I saw them! They were on a boat, they were smiling and rowing together!”

“it seems that’s a good end to the story.”
“Absolutely yes.” He took a break to drink his beer and then he went on “and the lighthouse?”

“The Fanad Head lighthouse! Beautiful. It was built after the shipwreck of the HMS Saldanha in the waters of Lough Swilly in 1812. The ship hit the rocks, its hull broke in two and was swallowed by the waves. Over 200 people died. The captain was found on the beach but he died after someone tried to come back him to life with whiskey; soon after, someone else accidentally shot at what turned out to be the captain’s parrot.”
“With Whiskey.”
“Yes, if he hasn’t come back to life with whiskey, he was very sick.”
“Indeed he died.”

“Anyway, there is another tale about that lake. It was the 23rd of January 1917 when the HMS Laurentic left Liverpool with, as well as the crew, a secret load of 43 gold bars on board.”

“On the 25th of January 1917 the ship stopped at Buncrana military base because some passenger were sick and then, it left in the afternoon. When the ship was on route to Fanad Head, it hit a mine on Lough Swilly. It was the explosion of the second mine combined with the darkness of that day, which made the captain and the survivors decide to abandon the ship. The ship quickly sank and the castaways began to row towards the lighthouse; unfortunately not everyone survived the low temperature. There were 475 people on board but only 121 survived. The best divers were asked to recover the gold. The recovery was carried out from 1917 to 1924 and then stopped (the cost was too high), the last was carried out in 1934. It would seem that there are still 20 bars missing.”
“Weren’t there 22?”

“It depends on the historical source… however, from the 25th of January 2017 the remains are protected by UNESCO and considered a cemetery of the First World War… I don’t think we can disturb the place by hunting for gold bars.”

“And then we would need to be professional divers.”

“Without considering, my dear friend, that by now we will do nothing about it.”

They laughed together at the stroke of midnight; as they slowly disappeared.

They would meet there the next day, for other pints, for other travel stories.