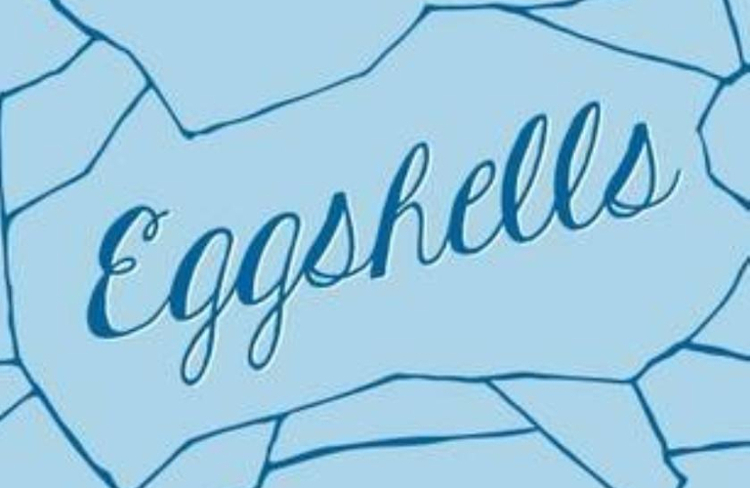 On the road (of Dublin) again with Caitriona Lally’s Eggshells. Our interview to Caitriona.

– Would you tell us something about the process of creating ‘Eggshells’, its whys and hows?

I had been laid off from my job in 2011, during the recession, and I suddenly found myself without a structure to my day. I went from having somewhere to be from 9 to 5 every weekday, with a group of colleagues, to having no deadlines or places to be – except the social welfare office.

I began wandering around Dublin, aimlessly, outside of rush hour when the streets were quieter, and I started noticing these street signs with letters missing from them, so that the signs spelt out new street names – for example Prussia Street had a ‘P’ missing and it was now Russia Street.

I made notes of these street signs and wondering about them. Then I started making notes of overheard conversations and interesting graffiti, and lists of beautiful flowers in the Botanic Gardens, and exhibits in different museums. And my main character, Vivian, evolved from that – a character who was an outsider, a misfit, somebody who didn’t belong and was trying to find some kind of pattern or code to lead her to a world where she would belong.

– Who was born first, the book or the writer? I mean: did you want to write a book, and you went for it, or did you have a story to tell, and that story became ‘Eggshells’ – the book – later?

I didn’t set out to write a novel – I had only ever written short stories and essays before, and I had had no success trying to get them published. The street signs with letters missing made me curious, and I thought I might write a nonfiction essay about them, but I realised I was having more fun imagining why these letters are missing and trying to find some kind of meaning behind that. It was the voice of Vivian that drove the story – the sense of desperately seeking something – and it was only when I started writing in her voice that I realised I could turn her walks and adventures into a book.

From Dublin, the author studied English in Trinity and came to prominence through the Irish Writers Centre’s 2014 Novel Fair initiative. Her debut recalls the work of another Irish debutant, Sara Baume, whose acclaimed novel Spill Simmer Falter Wither was published earlier this year.

The loner narrators of both books offer unique takes on modern Ireland, a country where many are struggling.

– Tell us something more about your (and Vivian’s) fascination for maps and streets.

Is it that obvious I’m obsessed with maps?!

Yes, I’ve always loved maps and globes, and our home is full of them. Maybe because I love travelling and am constantly plotting the next country I want to visit, maps hold such potential.

I love looking at the shapes of the countries, and comparing old maps to new maps and where new lines have been drawn.

My only problem is that I can’t actually read maps in a practical sense. I’m the person you see on the street turning a streetmap every which way, trying to locate myself on it. And I’m a very irritating passenger in a car – Google maps sends me into a cold sweat of confusion and I am no help in giving directions to the driver.

–  Caitriona and Vivian, Vivian and Caitriona: how much of you is in the character?

Hmmm. Maybe more than I realised when I was writing the book.

Also, Vivian shares my obsession with maps, as we’ve mentioned, and lists. I love lists of nice words and ideas, and I just took it to extreme with Vivian using her lists as a way to try and make sense of the world. But I’m (thankfully) not as socially isolated as Vivian.

That was one of the most difficult parts to write – the intensity of a character who rarely connects with other people.

– Almost a century since ‘Ulysses’, Dublin is still the “perfect” landscape for novels. It’s me or this dear dirty city still has a lot to tell, to writers’ ears at least?

Well, I grew up in Dublin and live here still, so maybe I’m too close to it to answer this properly.

Dublin is a very walkable city, a compact city, so it suited my (and Vivian’s) purposes perfectly. If I had set the book in London or New York or any bigger city, Vivian would have had to use public transport a lot more and that would have changed the shape of the book – and I might not have had her plot her routes on a map.

When I was in Pisa and Florence in November, I found all the beautiful architecture almost overwhelming – maybe when there is so much beauty, it would be difficult to know where to begin writing about it.

– Vivian is quite a nerd character. In what is far from you, in her definitely-not-Caitriona nuances and “madness”, where did you take inspiration from?

Hah! Maybe it’s wishful thinking that her nuances and eccentricities are far from me.

Some of the things she says are things that I might think – even though I know better than to say them aloud. Vivian doesn’t obey the usual social conventions, and that was very refreshing to write.

Also, I walk around Dublin a lot, and I take buses a lot, so I’ve had plenty of experiences of random conversations with eccentric people, so maybe Vivian partly was inspired by that. I like the way people who seem the most eccentric sometimes speak the truth more than the rest of us, who are concerned with what people think of them.

– What is your next writing project?

I’m currently working on my second novel, it’s going a lot more slowly than I intended, but life got in the way. This novel is set in Hamburg – a different city because I wanted to get to set my book in a different location to Dublin.

I’ve visited a friend there a few times and loved the port feel to the city, but it’s a different type of writing because the characters are engaging with Hamburg as tourists and strangers rather than inhabitants.

– What Irish books would you suggest to our Italian readers?

For another quirky book set in Dublin, Daniel Seery’s A Model Partner is funny and endearing. I’m a huge fan of Irish short stories, especially because I have such difficulty with the form myself – collections by Kevin Barry, Mary Costello, Colin Barrett, Danielle McLaughlin. Patrick McCabe’s The Butcher Boy is dark and funny. Anakana Schofield’s Malarkey is very funny and offbeat. And Samuel Beckett for his misanthropic, stinky characters.

Massimiliano "Q-ROB" Roveri writes on and about Internet since 1997. A philosopher lent to the IT world blogs, shares (and teaches how to blog and share) between Ireland and Italy.
@MassiMaxRov
Previous Catherine Dunne interviews Max O’Rover
Next Guinness and tea gang together in an Italian book