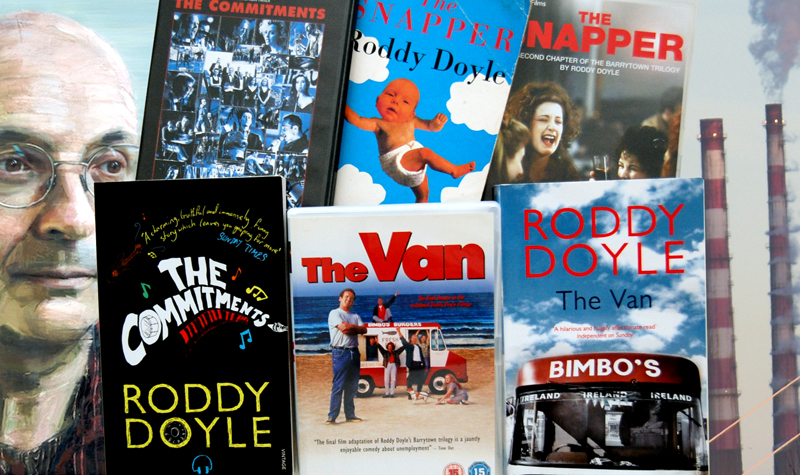 Waiting for HappyBDayRoddyDoyle: best of The Barrytown Trilogy

While we are waiting for #HappyBDayRoddyDoyle (you can find out more here), the best of The Barrytown Trilogy by Roddy Doyle!

The Barrytown Trilogy: The Commitments

– Strong tea, Brothers? He asked.
There wasn’t an answer so he threw fifteen bags into the pot.

– Now, Brothers, Sisters, we pat ourselves on the back for a job well done.
They laughed as they patted.

– Only culchies shop in Clery’s but, said Billy.

The Commitments a Wednesday night in another pub, a bigger one, The Miami Vice (until recently The Dark Rosaleen). It was a bit on the southside, but near the DART.

Somewhere in the quarter of an hour Jimmy had been negotiating with Dave from Eejit, The Commitments has broken up.

The Barrytown Trilogy: The Snapper

– You said it looks like another fuck of a day.

– I’d shag the elephant Man before I’d let him go near me again, the prick.

In a way, Bimbo was felt privileged, even though it was terrible. He knew that Jimm Sr would never have cried in front of the other lads.

– Don’t be thick, Daddy. All girls are daughters.
– Well, not my fuckin’ daughter then.

Sharon was looking at him but he wasn’t looking at her, not really. She wanted to smile. She’d never felt power like this before.

He was looking at his new bike and adoring it; its thinness, neatness, shininess, the colour, the pedals with the straps on them and, most of all, the handlebars.

– Roche is fucked. There’s no mountains like tha’ in Ireland.

Yeah definitely, Sharon and Mister Burgess was much a better story than Sharon and the Spanish sailor.
So that was what she was fighting against; Barrytown’s sense of humour.

Jimmy Sr grinned.
– Hang on till I get me jacket.
He was only human.

The Barrytown Trilogy: The Van

The outside of the glass was clean; the whole thing looking klike an ad. Jimmy Sr tilted the glass a little bit but the head stayed the way it was. They admired it.

the lads here, the crack, the laughing. This was what he loved.

He had a mug for work that he’d had for years; he still had it. It was a big plain white one, no cracks, no stupid slogans. He put two teabags into it; used to. My God, he’d never forget the taste of the first of cup of tea in the morning, usually in a bare room in a new house with muck and dirt everywhere, freezing; fuck me, it was great; it scalded him on the way down; he could feel it all the way. And the taste it left; brilliant.

There were days when there was this feeling in his guts all the time, like a fart building up only it wasn’t that at all.

It was only in the daylight that you felt bad, restless, sometimes even guilty. Mind you, the time went slower, probably because of the cold.

The weather was glorious. All week the sun had been blazing away

He didn’t want to end up like the Phantom of fuckin’ opera.

– Fuckin’ Larry wouldn’t give yeh the steam off his piss if you were dyin’ o’ dehydration.

Darren deserved better; the first Rabbitte to do his Leaving and his father couldn’t even get up out of bed properly.

Massimiliano "Q-ROB" Roveri writes on and about Internet since 1997. A philosopher lent to the IT world blogs, shares (and teaches how to blog and share) between Ireland and Italy.
@MassiMaxRov
Previous Happy birthday, Roddy Doyle!
Next Many Myles to go: Paul Fagan about Flann O’Brien