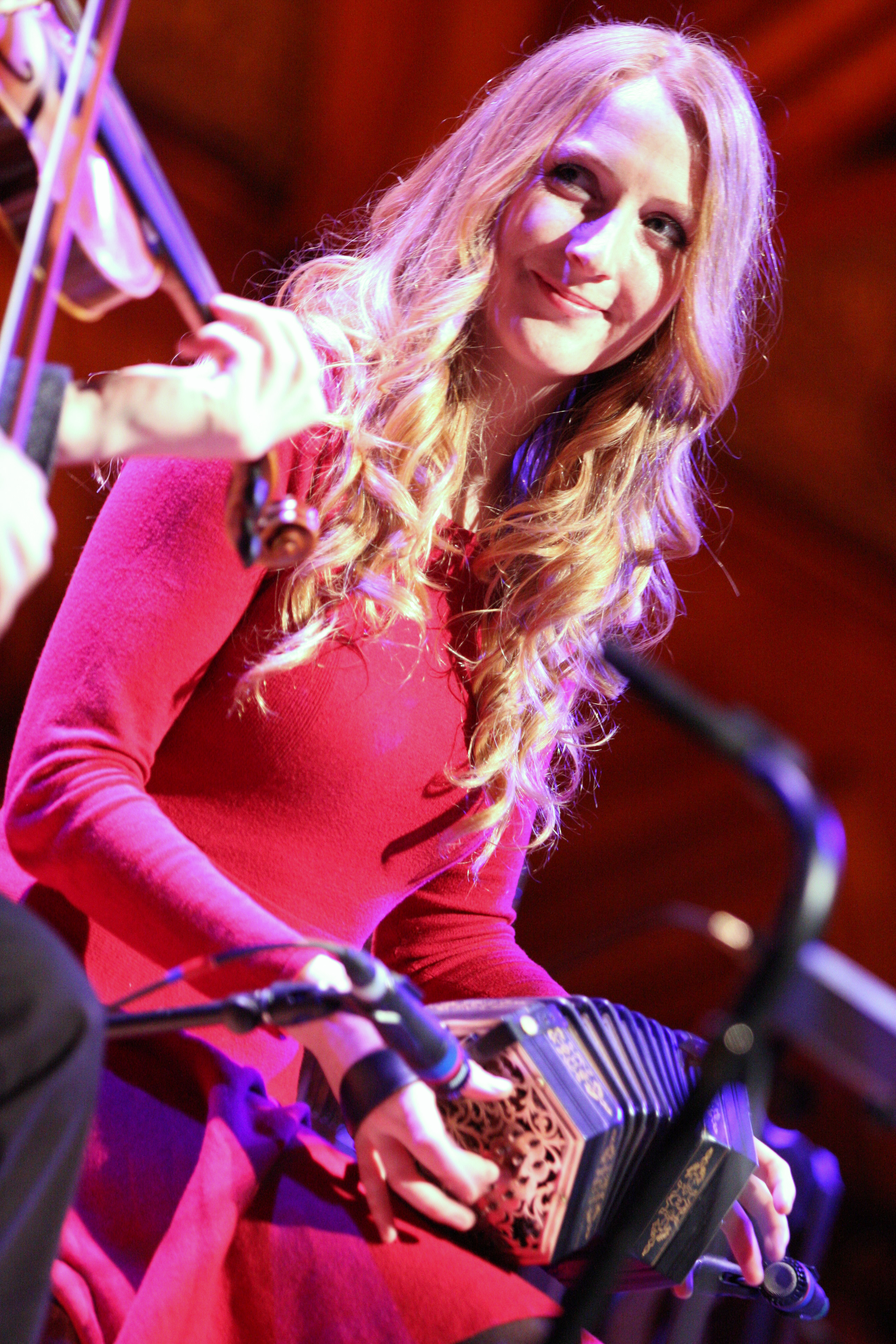 This is the second part of our interviews about their project for 2015, and we are very happy to have some good friends of ours with us; let’s start!

In 2015, I’m excited about a new CD I’ve been working on with fiddler Ciaran O Maonaigh.

It’s a duet CD (with some special guests). It’ll be called Caitlin & Ciaran and it will be a recording of Irish traditional music on concertina and fiddle, with some dancing (from me) and some accompaniment on guitar, bouzouki and piano.

We are aiming to release it in Dublin in April 2015, but we will have for sale at Le Bono in France in February and on our USA tour in February/March.

We’re very excited about this CD. I’ve been playing with Ciaran full time for about 2 years and we really hope people will enjoy listening to our CD.

We have some fantastic musician friends of ours playing on the CD with us: Sean Og Graham on guitar (Beoga), Caoimhin O Fearghail on bouzouki (Caoimhin played guitar on my 2012 solo album ‘Caitlin’) and also the very talented Jack Talty on piano.

They are all super musicians – experts on their instruments and we just Love the sounds they have brought to the recording. The CD itself has a couple of slow airs, reels, jigs, highlands and some of my own compositions as well as lots of music from Donegal and some from Scotland.

So we are hoping to tour with that CD a lot in 2015! Hopefully in Italy! I hope to perform more with Birkin Tree also in 2015. I might be doing a concert with Birkin Tree in Savona on March 14th 2015 so I hope to see some of you there!!

In 2015 we look forward to another year of gigging and special events.
In February and March we will be performing in France, USA and for the first time ever Canada. It will be a busy touring schedule but we can’t wait for it.
From April until June we will be performing around Ireland at various festivals and venues. In the summer we look forward to heading to Germany, Italy and USA for some festivals. One highlight is that we will be performing at Milwaukee Irish festival as a seven piece band with the addition of Drums and Double bass to our existing line up.
We are also looking forward to a solo tour of Germany and Switzerland in October before heading to Denmark for a tour in November for the first time in almost 3 years.
So 2015 is already looking very busy for us but a lot of exciting gigs ahead for us. You never know in between all the touring we might get to make a recording too. So keep in touch with us on facebook and our website for more details.
[youtube

2015 is shaping up to be a good year. The band I play with, Danú, are releasing an album at the end of January called Buan.
It coincides with Danú’s 20th anniversary and the album was produced by Dónal Lunny. We will be launching it at Celtic Connections in Glasgow on the 29th Jan and The Temple Bar Tradfest on the 30th Jan in Dublin. We’ll be touring it over the year and featuring ex-members of the band and special guests.
I have a new music series coming out television on TG4 and BBC Alba in January that I co-presented with my friend, Scottish singer Julie Fowlis. We are travelling around some of our favourite parts of Ireland and Scotland and bringing friends with us to meet and play with local musicians.
I took part in a charity single called Shyma Smiled For Me also featuring Rory Gallagher, Liam Ó Maonlai and Honor Heffernan that was released yesterday, all proceeds going to various charities to help the children of Gaza.
I will be singing again with the collective A Stór Mo Chroí featuring John Spillane, Karan Casey, Lumiere, Donogh Hennessy, John McSherry and Dónal O’Connor. Our next show is at Celtic Connections on the 31st Jan.
Apart from that there will be various other gigs, I especially look forward to playing with my musician friends at home in Dingle such as Gerry O’Beirne, Jeremy Spencer, Tommy O’Sullivan and Pádraig Ó Sé.
[youtube

It looks like 2015 will be a busy year, musically, and I’m happy for that.  I’ll be continuing to travel and play in support of my newest release, Here This is Home.
Tours to Ireland and Japan are already scheduled, with a small European tour in the planning stages alongside a few American tours of the Northeast, North Carolina, California, and the Pacific Northwest already on the books.
I’ll be playing a bit with flute player and singer Hanz Araki, as well as finishing a duo recording with Colm MacCárthaigh to follow up our 2011 release, Cuan, and I think I’ll be venturing a little bit into the daunting “solo show” territory just to see if I can do it!
Information about live shows and news can be found on our site.
[vimeo 62463428 w=610 h=343]

I hope 2015 will be a year filled with music and exciting work projects. Early in the year, I will recording on a new CD with ICE (Irish Concertina Ensemble) which will be followed with some launch gigs around Ireland. I also look forward to performing at some really exciting gigs and festivals in the US, Japan and a European tour throughout the following months as a soloist and with fiddler Neill Byrne and other musicians.
I love my work in TV and I am looking forward to researching and producing some new music and arts programes in the new year! Most importantly, I hope to spend more time with family in friends in 2015 as I did not get to see them much in this past year.
[youtube http://www.youtube.com/watch?v=YLSmyah7p2U&w=610&h=343]

And now stay tuned for Back to the Future of Irish Music, Part 3!